Chinua Achebe delivered his seminal lecture on Conrad at the Amherst Interdisciplinary Studies Institute, UMass back in 1975.  Last October, the institute marked the 40th year of that lecture with a symposium. All in all a stimulating conference, with Johnnetta Cole, Rowland Abiodun, Esther Terry, Ekwueme Michael Thelwell, Okey Ndibe, Caz Phillips, Chika Unigwe, Jules Chametzky, Maaza Mengiste, Chinelo Okparanta, Achille Mbembe, Patrick Mensah, Joye Bowman, Sabina Murray and director, Stephen Clingman, among others, in attendance. My own panel with Maaza Mengiste and Chinelo Okparanta was moderated by Sabina Murray. It was titled ‘We shall do Unheard of Things’, and was caught on video:

In my ‘paper’ I tried to lay a foundation for the ‘bribecode’ as a post-Achebe baton. It was a useful symposium, a contemplative pause to evaluate how much had changed and how much remained the same. For the time- and data-challenged, the Massachusetts Review, which published Achebe’s original paper, should publish some of the provocative papers presented at the 2015 symposium in its Spring Issue. In the meantime, some photographs of the event: 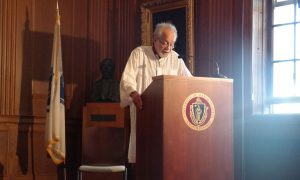 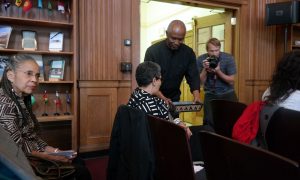 Okey Ndibe is an alumnus of ISI so it fell to him, as oga, to serve kolanuts earlier broken by ‘Elder’ Rowland Abiodun 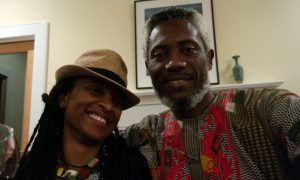 Nice to catch up with Chika. Last meeting was at the Manchester Art Gallery 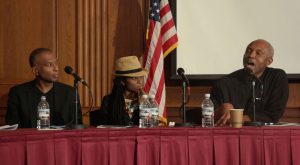 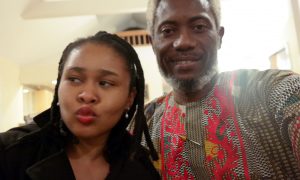 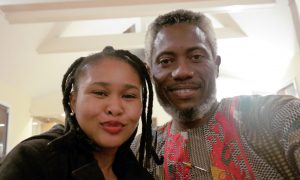 …but she couldn’t stop smiling… 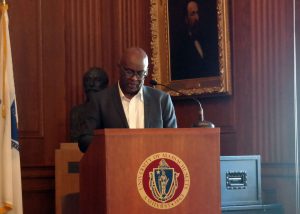 The Provost hosted a convivial reception, with more photos at this link to prove it:

RT @NKondjashili: Reading Elder @chumanwokolo's The Ghost of Sani Abacha. I am inclined to think that he doesn't know how to write bad stor…
h J R
Follow chumanwokolo