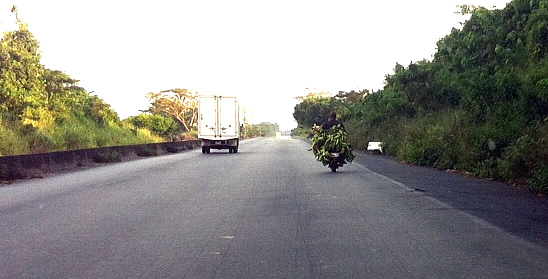 Wisdom wears disguise for fear of mobs, is not too precise:
did he prophesy the man’s death…   or did he kill the man?

Today I travelled the 460 kilometres from Lagos to Asaba. The drive is pleasurable for a change. It is not yet perfect, but the road has seen major improvements over the last twelve or so months. Last year, huge craters caused queues that stretched tens of kilometres in both directions. It was ‘normal’ to spend a dozen hours on this journey. Today I did it in six. Leaving Lagos at 2pm, allowing for leisurely breaks to haggle for pineapples, I was in Delta state’s capital town by 8pm, job done.

In the old days, the journey sometimes became a safari. Often a truck would get stuck in a pothole, blocking the expressway. Drivers were forced to detour through bush paths, startling cane rats and overrunning sleepy villages forgotten since the time of the colonials. Today’s drive was uneventful in that sense. The one excitement I witnessed was caused more by dilapidation of car than decay of road: as I drove through Ondo state, an antiquated Fiat ahead of me bumped into a leftover pothole and its bonnet bounced off (yes, that bit of metal that usually sits on the engine), sailed over said Fiat and crashed onto the tarmac behind. No collision, but it was a near thing. I was powerfully tempted to take a picture of course, but my hands were needed to steer around potholes and bouncing bonnets. This flying bonnet is clearly a metaphor for something bigger, but I am also tired. Will have to sleep on it.

But this motorbike ‘stunt rider’ with his unwieldy payload of a plantain harvest does put me in mind of Governor Babatunde Fashola and his stand-off with commercial motorcycle riders in Lagos State. I have motorbikes, flying bonnets and brand new expressways on my mind…

…and a pineapple and a quiet bed is the second day.