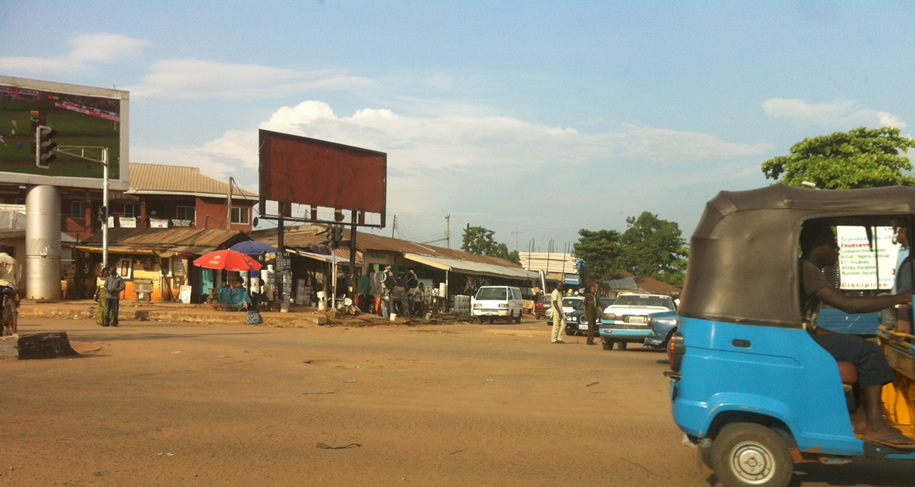 I wake up with motorbikes on my mind, but there is not a single one in sight.

In Asaba it a mild shock to find that I cannot see a single motorbike taxi. In this town that was once overrun with prowling bikers, there is not an okada on Nnebisi Road, none on Umuaji King Street, and emphatically none on Ezenei Avenue… Instead of the ubiquitous bikes there are new buses and shiny new trikes. Yes, Delta State has banned bike cabs completely from Asaba, Effurun and Warri with effect from today.

Like many other states, Lagos has recently banned okadas as well: motorbike taxis can no longer operate on 475 major roads in the city. (Elsewhere they can carry on as usual, but those 475 roads were okada-livewires and many will be taking early retirement.) Naturally this is not very popular among the bikers – or those captive patrons whose only alternative transport is the prehistoric option of walking. Protesters rampaged and vandalised 50 state buses in revenge for the 3000 contravening motorbikes crushed by government. Others, though, can see the point: many motorbikes ignore road signals and are prone to serious accidents and fatalities. They also account for a disproportionate amount of crime. Everyone seems to have their own bag-snatcher story. An elderly relative recounted a bag-snatching that she witnessed recently. She was very dramatic and it was clear that Nollywood lost a diva in her… I could almost see the victim staring with surprise at her broken strap, a memento of what was once a fine handbag.

In a modern city, bike cabs should be an anomaly, but without effective mass transit systems the motorbikes address two urban issues: transport and jobs.

It is rather like the expressway I travelled yesterday. Back when the road was very bad, travellers routinely passed the night on the worst patches. That captive market drew hawkers and traders from nearby villages, selling every manner of food and drink. Eventually though, years pass, the road is fixed, and traffic begins to whiz past the previous centres of impromptu commerce. And bereft villager-traders return to their impoverished villages in the womb of our forgotten forests. This is when the question arises:

It is not much of a mystery what happens to a rural trader whose business income returns to zero: if he is cynical and disgruntled he might dig up the brand new expressway to restore his market stall (much in the same way that others drill holes in oil pipelines running past their impoverished villages). If he is young and dreamy enough he might seek his fortune in Lagos. The slums of Lagos, Port Harcourt, Abuja and other cities will welcome him with relatively open arms, into informal jobs like… motorcycle cabbie… but only for a time.

For in these cities, there be governors.

And these days, Governors take the beautification of their cities seriously. In the past few months hundreds of thousands of homes have been destroyed in slum-clearance programmes in states and territories as far-flung as Abuja, Lagos, and Port Harcourt. Many more slums are pencilled down, but most recently, Abuja has flattened Lugbe, Lagos has levelled Makoko and Port Harcourt has crushed Abonnema waterside, many of whose residents now live under trees.

True, we should not keep roads in disrepair just to prosper roadside hawkers, or ignore the menace of motorbikes to keep bikers in work, or even allow the proliferation of slums in defiance of building codes. What we can do, though, is to make sure that government policies does not ravage hundreds of thousands of citizens with the pestilential force of natural disasters. Delta state did well to line up new buses and tricycles to take up the slack caused by the loss of the okadas, and to subsidize the sale of tricycles. There is a clear sense of the overnight upgrading of the transport infrastructure in the state, and that is a very good thing.  But we must also attune our ears to the pain behind the gain; there are far more than 1, 250 okada riders between these three cities. Far too many riders will be left out in the cold. And there are liberty issues around totally prohibiting the use of private motorcycles with pillions on city roads.

Perhaps there could have been an even longer transition, and regulation into the bargain. For all the kidnapping executed by 4WD vehicles, a ban is not imminent.

Government policies which affect hundreds of thousands of the most vulnerable should not just make sense in the long term, it must pass the test of social justice today. We can and must spare a thought for the humans caught in the caterpillar tracks of the development engine. If we put Social Justice at the heart of government policy, we may still have to break eggs to make omelettes, but progress will no longer be as ruthless and inhumane. For all the violence vented into a system is rarely lost. It is often absorbed, reprocessed, and returned to sender, with interest.

The scale of the suffering is significant. When the floods rendered hundreds of thousands of people homeless and destitute, it struck a chord with housed Nigerians. The homelessness and destitution caused by government policy is no less devastating for being well-meaning. The mass homelessness and redundancies triggered by the national war against the Okada, as well as the bulldozing of slums are directed at the same constituency of the dispossessed and must be addressed compassionately. When life in rural Nigeria is made viable, urban slums will be depopulated, and anomalous jobs like that of the okada rider will become extinct. But until then, on Life’s ground floor, there are no safety nets. The grave is a step away when Starvation begins on the day after the last fare is earned. For many, the slum residence is the Last Chance Saloon.

It is not progress to replace bikers with desperate gangs, or slum dwellers with street children.