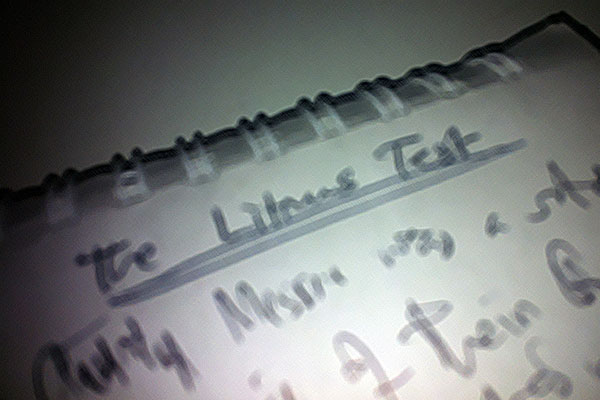 I am standing in a mass for the dead when inspiration arrives. Out of respect for my friend’s late brother, Edward, I try to restrain it, but I am superstitious about stories: I believe that when you get into the habit of aborting tales, their sibling stories will give you a miss. I blame the priest, too. ‘Live as though this could be your last day’, he preaches. So I do: I go out to my waiting taxi and rescue my notebook. I can do this on my phone’s ‘notepad’, but somehow it looks too much like texting in church. Scribbling in church feels a lot less heathen. & I can almost feel God shrug: you won’t be doing much scribbling when you’re carried in here yourself.

I don’t know yet if I like the story: I shall call it The Litmus Test. If it passes its own litmus test it will make my next collection. No, it’s still too new, it’s probably the first of a dozen rewrites and you cannot read it yet. But if you want to see how a story conceived and started in a funeral reads like, here is The (Hired) Coffin.

Now I have a three-hour-wait in the airport and another story is begging to be written. I am missing my mislaid pencil badly. These ball points are so gauche. This airport is a tented one, like Nairobi’s, so there are no electrical points for my power-hungry laptop and phone. I pull out my paper notebook once again. The world is an interesting place; curious how much writing I am doing on paper these days. And how much writing I am wanting to do on typewriters. This probably bears psychoanalysis.

Indeed, if I were an alien psychiatrist, I’d want to psychoanalyse the planet!

Anyway, its a good thing I am not writing into my phone: I don’t have to ‘switch off all electronic devices’ to humour the pilot and can write right through take-off and landing. Air crews like passengers who write on paper. I do hope some wannabe terrorist doesn’t attack fellow passengers with a pencil-dagger in American airspace. That would make the rest of the world roll out new travel restrictions to ban the use of pencils in airplanes. I finish a first draft and have enough time for a nap before the plane touches down in Lagos. There is always the possibility of scaring fellow passengers with sleep-associated-sleeping-disorders, but life is too short to avoid snoozing for fear of snoring.

This second story is about a Lagos cabbie. My imagination is getting lazy: I spend quality time in funerals and cabs and all I’m getting are stories about funerals and cabs. Oh well. The working title for the cabbie’s tale is The Monkey on Teslim’s Back. It’s a rubbish title, yes, and if this story survives I’ll see about revamping it. Unless I get to like it. I’m notorious that way.

Rest in Peace, Edward, and thank you for my new sense of urgency. I never met you but I almost wept for you yesterday: your elderly best friend tried to say a few words at your service of songs and kept breaking down… Strange how I hold it together at the funerals of close relatives, and then the funeral of a total stranger blasts through my defences. Your siblings, children and friends… there was love there for you.

But then you knew that all along, didn’t you?