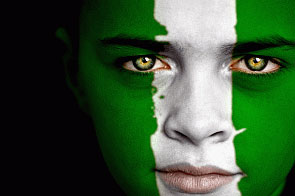 Never could think too long on old faces
without this pin-pricking of tears,
seeing how goodbyes traded for a season
is pressed to serve for eternity.
– extract from Enugu in the Sky, (Memories of Stone, 2006)

Emotions have a geography too. When you have been away awhile it is not only the skyline and the landmarks that change. The very emotional geography of your neighbourhood changes. Go ahead, stay away for long enough and you end up asking after dead people.

And how is your father then?
He is dead, uncle.
I am so sorry. And your mother? How is she coping?
Uncle! You didn’t hear she died eight years ago?

But where natural boughs have withered, you can graft new ones. The generator technician had an Igbo name and I addressed him in the lingo,

Sorry I do not speak…
How come?
I am from Kwale, our Igbo is slightly different.
Fine, the dialect is different but we can hack it…
Well, I grew up in Lagos so my Yoruba is much stronger than my Igbo.

Turns out he had been living in Lagos since age 5, and actually has a Yoruba name. He will not use his Yoruba name here though, because he feels an undercurrent of unfriendliness to Yorubas. I tell him that the main current is love: he lives in Cable Point after all, a district that is home to two generations of thousands of Hausa speakers. I discuss this with my tailor who is Yoruba by descent, an enterprising fellow from Oshogbo now resident in Asaba and he smiles as he sketches out my new Yoruba-style buba. He has brought his brother home to Asaba. His frame of reference is Onitsha Market, not Oshodi Market. He uses his Yoruba name. He is home.

I have many hometowns too, the first is Jos, where I was born, and where I spent an indelible Youth Service year in 1984. In my teenage years the Kitchen was (by the grace of indulgent mother and sisters) a magic place where ready-to-eat meals materialised from the ether of desire. In my Tudun Wada bungalow in Jos, I learnt the hard way how to approximate that magic. I survived my early indigestible dishes too. Used to make an annual pilgrimage back there, from Lagos, until reality interrupted…

The second hometown is Asaba, where the bones of my ancestors are interred, whose trees are still scented by the nectar of their comings and goings.

I have also lived in Lagos a quarter century. I can stand by the high rise on Eric Moore Road and survey the metropolitan streets, while summoning memories of the desolate scrubland on which I rode my first bicycle, with nothing but wild pigs and monitor lizards for company. I can look north from Fadeyi, at the ten-lane Ikorodu Road, and remember bussing to school on its two-lane predecessor. And despite my pitiful language skills, had my classmates not laughed so helplessly at my teenage Igbo accent (Tade, I won’t mention your name, but I still remember the tears that stood in your eyes…) I probably would speak Yoruba like a native now…

So this is Nigeria. Fall in love with man or meal from anywhere you want and said spouse or cuisine is yours till death do you part. Put your roots down anywhere and grow unique fruits, textured and nuanced by the genes you bring and the native waters you drink. The Commander-in-Chief is not even a soldier but he can wear, by right, any of the regalia of any of his military services. At the dinner to wrap up my (African Writing/University of Manchester) Creative Writing workshop at The Benue State University last year, my co-lecturer Geoff Ryman and I were presented by our generous hosts with Makurdi’s iconic black-and-white length of cloth. From mine, I made a fine danshiki. (Thanks for the picture, SuEddie.) Once, a perfect stranger greeted me confidently in a strange language and I smiled, I am not Tiv, I explained, I am just wearing our national dress.

I like it too, which is why I know that the human heart holds no passport, but likes and loves without a nod to state or ethnicity.