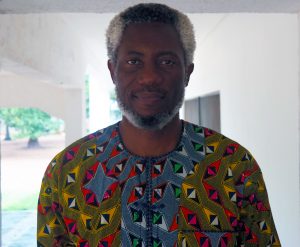 I am Chuma Nwokolo, and I tell stories.

I was born in Jos, in 1963, although I have no full recollection of the event. I graduated from the University of Nigeria Nsukka in 1983 and was called to the bar in 1984. I was managing partner of the C&G Chambers in Lagos and  writer-in-residence at The Ashmolean Museum in Oxford.  I founded the literary magazine African Writing with my old friend, Afam Akeh. My first novels, The Extortionist (1983) and Dangerous Inheritance (1988), were published by Macmillan in the Pacesetter Novels. My stories have found foster homes in the London Review of Books, La Internazionale, AGNI, MTLS, Arzenal, and Sentinel, among places.

I am guilty of poetry, some of which have been collected in Memories of Stone (2006) and The Final Testament of a Minor God (2014), but without question, the most difficult, sustained, and in a sense satisfying thing I have ever done is my imminent novel, The Extinction of Menai.

Great stories can change us… if we ever get around to reading them. Yet, there is another type of writing that can change the world, whether they are widely read or not: Law. Literature rolls up into a scroll; the law rolls up into a baton for the stubborn, and often, that makes all the difference. After the gentler persuasions of literature, society is eventually renewed by the agency of transformative law, think the abolition of slavery, of Apartheid.

Thank you for stopping by.