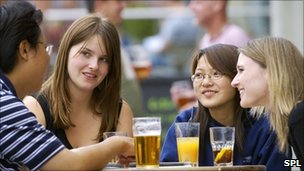 Glasses could be banned in pubs up and down Britain, reported the BBC a few yesterdays ago. This is a policy proposal from  Dr Alasdair Forsyth, from the Glasgow Centre for the Study of Violence.

And so the quest continues to cleanse public and private life of everything remotely dangerous and threatening to human life. Research and manufacture of bombs and nuclear submarines continues apace – of course – but for now glass glasses are to be phased out of pubs in favour of plastic glasses. The pedantic may well wonder why anyone would pay premium pounds to drink lager out of a cheap plastic glass, and indeed, what all the fuss is about. It is down to blood and money, Sir. In the last year alone, hundreds of pints of the former were spilled by brawlers and millions of pounds by the NHS in thousands of  pub brawls in which glasses were used as weapons. The eyes of the average Joe hang in the balance, in danger of a gouging on his Friday night out.

This policy will save eyes and lives so it is, of course, well worth pursuing. We’ll have to overcome the lobby of many other manufacturers’ associations as well – because  glass bottles are another perennial pub weapon of preference (that and the traditional, heavy pub chair) and bottle makers, for instance, are no fools. They know who our next target will be when we are done with glass glasses. But for now, this is a vote for a public policy that puts off for another few years the core question why, every single night, hundreds of pubs up and down the land are converted into pits for human cockfights. It may well be that this generation is lost and will require the props of Glass-Bans and the Compulsory Wearing of Boxing Gloves After the Third Glass of Lager to prevent said blood-letting and NHS funds-letting, but sooner or later we will have to address the real problem:

how to ensure that the modern 21st century family produces, not hooligans, but civilised citizens who can drink out of glass glasses.

One Reply to “Banning Glasses from British Pubs”