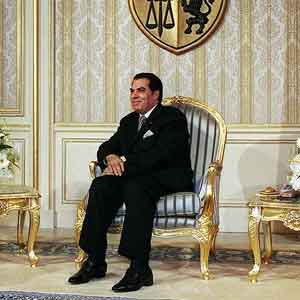 Yesterday, President Ben Ali was run out of town. He had been president of Tunisia for over two decades. It seemed  a personal fiefdom where he farmed out lucrative roles to family and friends – corruption and cronyism being par for the course in stagnant political waters across the world. Meanwhile down on the streets things were steadily getting worse.

Tunisia’s streets are of course prettified for the rich. Tourists are drawn there by the droves. When the crisis erupted, Thomas Cook had 5000 British tourists to fly home. But life wasn’t so pretty for those who had to live there. Ben Ali ran a sit-tight, repressive regime that  mimicked the status quo in Arab politics where the powers of traditional ruling families (that have atrophied in places like Europe and most of Africa) have remained as strong as ever. The Arab status quo is bolstered by the twin bastions of oil revenues and the occasional conflation of religious and political leadership; Tunisia lacked both, and had a pretty educated citizenry with a median age of only 30 years, so when the rage – and the prices of goods – began to rise, not the curfews, not the army, not the usual blandishments… not even the killing of some 35 protesters could stop the protesters.

‘We don’t want jobs, we don’t want food,’ shouted a protester to a TV camera, ‘Let him just GO!’

This is a heart-warming moment in the annals of voter-sovereignty, for voters also do vote with fists. The Tunisian-on-the-Street is my Man – and Woman – of the moment. And yet in this opportunity lies grave danger, for Medusa will always grow another head. Tunisians must remember their lesson from history: Ben Ali began his 23-year reign as president by moving from the position of Prime Minister to supplant former President Habib Bourguiba.  The protesters must not be satisfied merely by a baton change from another incapacitated president to his prime minister. The world will watch closely to see how thoroughly a reformed Tunisian state can emerge from this crisis, fully realigned to the interests of the people. Never again should we witness the travesty of an army shooting its employers on the orders of a mere servant.

This Tunisian Fever has bloodied Ben Ali’s nose; with any luck it is an infectious malady. No doubt there will be some tossing and turning in certain Presidential beds up and down the world