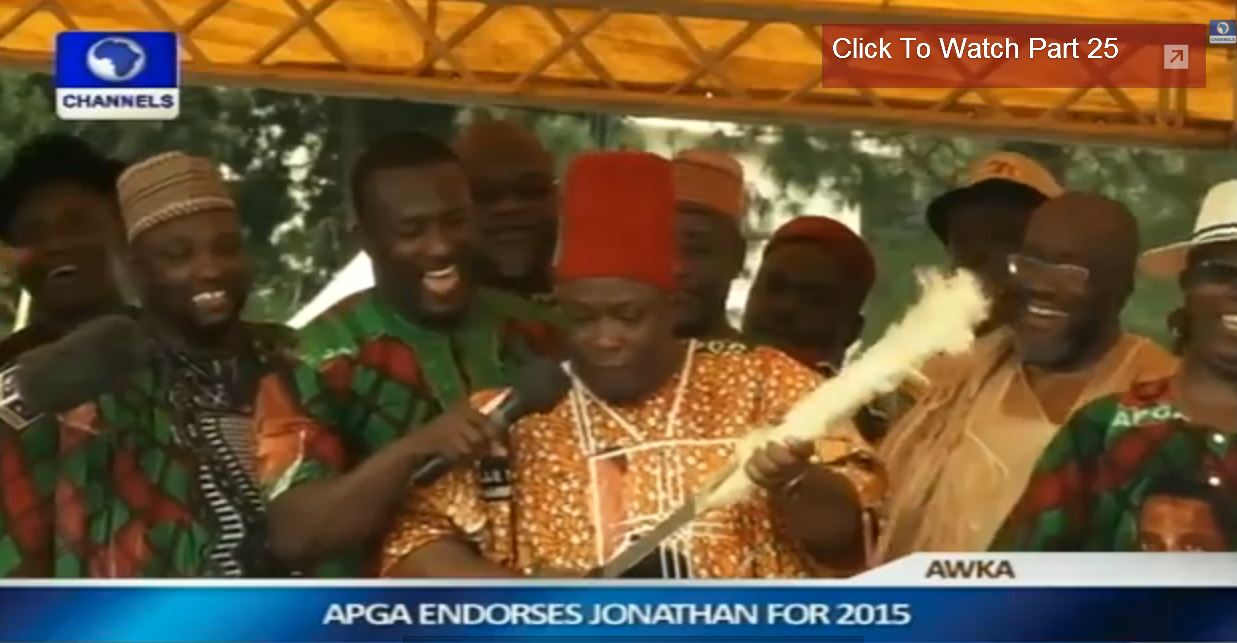 Chief Victor Umeh & the Order of the Machete

In other news, the Prime Minister of Lesotho has done what dozens of African heads of states have done before him: he has fled his country for fear of his life. News networks like BBC and Al Jazeera have been reporting Lesotho’s ‘coup’ in inverted commas, perhaps because the deputy Prime Minister has derided the very idea and insists he is still merely a deputy, perhaps because the Prime Minister himself carried out a constitutional ‘coup’ of his own when he sacked Parliament in June to head off a vote of No Confidence that might have sacked him first. From his exile in the Republic of South Africa, the beleaguered Prime Minister complained yesterday:

“I came into South Africa this morning and I will return as soon as my life is not in danger.
I will not go back to Lesotho to get killed.“

Which brings me to the main news of my day. Chief Victor Umeh, chairman of the Nigerian political party, APGA, ended his pro-Jonathan speech in Awka before tens of thousands of party supporters by drawing a dark machete from a white scabbard, which was carried conspicuously on his shoulder all evening, and declaring:

‘This knife is nnu agha ndi Igbo [fighter for the Igbo cause]. It was given to me on July 29th in Abia State. We are going to go to battle with it. Anybody who stands on the way of APGA… (only Jonathan is safe) [ as for all] others…. [he thrusts the machete into its white scabbard, supplying the relevant Nollywood sound effect for disembowelment or decapitation or whatever).‘ Here is the video footage, with the relevant drama at 9.30 minutes:

This performance disturbingly mimicks the Boko Haramite, Shekau, who flails his own weapon in his Youtube videos while impersonating a politico struggling to string together a coherent vex, inciting those who cannot read the Quoran for themselves to blow themselves up in a marketplace of innocent Nigerians.

The machete is of course a redolent metaphor for the democratization of homicide. No longer is mass murder the preserve of a territorial army. Subsistence farmers who cannot afford an Uzi can still decimate a small hamlet on their way to farm by the inspiration of Rwanda (where some 900,000 souls were mostly hacked to death by machete) – and now, apparently, by the licence of APGA chairman, Chief Victor (The Machete) Umeh.

The party chairman’s act is not only moral indefensible, with crass ethnicism thrown in to boot, it is criminal, and INEC ought to be watching and responding. S. 131(1)a of the Electoral Act provides that

‘A person who… threatens to make use of any force, violence or restraint… commits an offence and is liable on conviction to a fine of N1m or imprisonment for a term of 3 years.’

It is worth pointing out though, that even though Chief Victor Umeh’s scabbard is white, it will never be stained by blood. No matter the provocation (& despite the precedent of the Mayhem in Rivers’ House of Assembly) Chief Umeh is unlikely to draw nnu agha ndi Igbo in person and hack down Gen. Buhari or other opponents of his preferred president in a conference room. Chief Victor (The Machete) Umeh is unlikely to lose his arm or his life in the fires to come. In raising the stakes of politics from votes to blood, it is not his blood that he is proposing to be shed, for if it ever came down to that, he will concede the election and wait another four years. After their minions have been slaughtered in the field of war, generals always have the good sense to negotiate settlement in a conference room. What Chief Umeh more likely has in mind will be the blood (and lives and limbs) of the cannon fodder who will heed his call, as well as those who stand in APGA’s way.

And here is the common denominator of our political class: they are the first to flee. (Of course the rank and file is taking notes, as the recent desertions in the Nigerian Army is demonstrating.) The Prime Minister of Lesotho, who won a mandate to defend his country and his constitution, flies into exile at the approach of his own soldiers. He does not stand and rally his citizens to defend their constitution. Neither is he fleeing to avoid a bloodbath that will cause the death of innocents. No: on his own admission, he is fleeing to protect, not the constitution, not his countrymen, but himself. He plans to be back as soon as he can be assured that he will not be killed.

But this is the common denominator of the fires to come: they will burn the diligent and the laggard, the principled and the unscrupulous. They will burn the Dokubos and the Umehs trying to be heard above the frenzy of feeding sycophants. They will burn gentle folk watching unfolding travesties with folded hands. And they will burn the equal opportunity validators who argue that because the northerner, Buhari, prophetically promised an ‘ungovernable country’, the southerner, Umeh should also be entitled to flail his farming implement as well.

Because wildfires have no respect for the hands that kindled them.

Both fire and wisdom can change a country, but wisdom accomplishes constructive change, without shedding the blood of the innocent. So let us provoke a politics of ideas, of cunning even. Let us with one voice throw out the machete from the political stage. The broom, the umbrella, the cockerel… all these are acceptable symbols in our politics. Never the machete. Never the machete. It must never be alright to attend political rallies with guns and machetes in hand. Brute force has no place in our military, how much more in our politics. And if the Chairman of APGA must appear in public with the accessory of a machete christened for a tribalist agenda, which he then unsheathes to threaten and incite, then Chief Umeh represents a throwback to an era we must not go back to.  He must apologise for this failure of judgement and withdraw from our politics – and that immediately – before he recruits believers to his homicidal Order of the Machete.