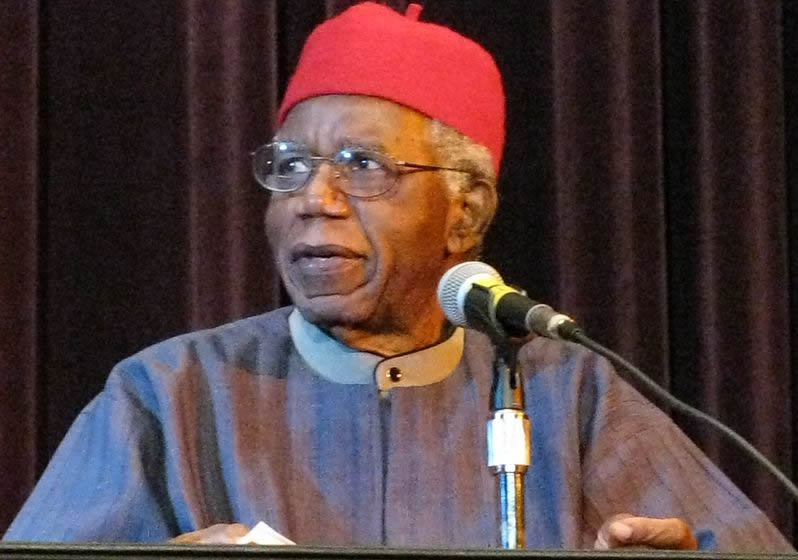 The ancestors are richer today. That philosopher and great soul Albert Chinualumogu Achebe, writer of the most widely-read book in African literature who was loaned to Africa and the world for all of 82 years has joined their ranks. His forthright voice, tenacious intellect, and lush imagination returns to native shores.

For much of his later years he occupied a body that was broken on the roads of his native Nigeria, but his mind was a defiant iroko until the end. The eagle, Chinualumogu was a liberation figure in the field of African Literature, but unlike many of his peers in the fields of politics and society he did not diminish his stature for lucre, nor did he peddle his image for influence. He stayed in the mould of the stoic village elder, a voice that spoke his truth in and out of season, that declined to moderate criticism to harvest the stately blessings of great voices grown bland. He made a path that is now a freeway; he brought a light that cannot now be extinguished. In the next few weeks there will be much agonizing that there will now never be a Nobel to his name, but Prof. Chinua Achebe needed a Nobel about as much as he need a Ph.D. Instead, with his passing, he has now gifted all of Literature with a name for an award worth endowing, competing for, and winning.

So the reports of his death are grossly exaggerated. With millions of his novels in dozens of languages in every country in the world, that fate may overcome many a writer but will never be the lot of Chinua Achebe. His books will always speak as limpidly as they have spoken in his lifetime. His spartan example will inspire as fervently. He rests after a lifetime of a labour started early and sustained until the end – writing the seminal Things Fall Apart in his twenties and his controversial autobiography, There Was a Country in his eighties. The only question for the writer of No Longer at Ease is… wherever he is buried, will he now be at ease? For all his achievements, our African Icon was never at ease in these climes. His photographs mostly depict a thoughtful mien. His essays wrestle society’s eternal demons.

Yet, the palm tree’s trunk comprise the nodes of fallen branches and the tallest trees are those that have lost the most branches.  Chinualumugo has fallen, but his very absence lends stature and height to the palm he once inhabited. His old battles now fall to a ‘greener’ generation. The sage will ‘lie at ease’, as the living takes up the cause to liberate the mind and soul and body of his people.