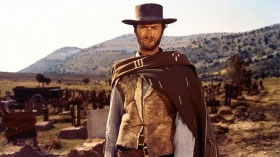 Cowboy Flicks and the Myth of Badman’s Goodwoman

I don’t know. Even as a 10-year-old watching cowboy movies on black-and-white TV, I have never swum with script writers. Their stories always end with that showdown on Main Street which runs somewhat like this:

Cowboy struts out to the hum of terminal music.
Hands hover over holsters.
Eyes lock.
They draw! The hero’s guns spit fatally!
Badman’s half-drawn pistols fall to the dust, the dying gunslinger crumpling in slow motion.

That is what the genre was all about after all: satisfactory shootouts over a Fistful of Dollars with the hero always trumping.

But I was cursed with an overactive imagination. As a child my mind was never fully manipulated by scriptwriters and movie directors. Even when the Wild Bunch of characters were clearly delineated into the Good, the Bad, and the Ugly, my imagination continued to conflate badman with human. I have somehow intuited badman’s good wife, innocent children, funny nephews, mischievous nieces, and irascible in-laws all of whom were erased by scriptwriter fiat. Despite his slate of movie iniquities, which emotionally validate the killing bullet, my mind refuses to disconnect from badman in the dust where the scriptwriters and the cameras will leave him. Especially because Badman was usually the Other. The unshaven Mexican. The grunting Indian.

I always follows the corpses home, where the real drama – in the mind of a 10-year-old daydreamer – always begins.

After all, a whole sub-genre of cowboy movies do start that way, with a handsome hero motivated into his campaign of photogenic revenge by the corpse of his dead father, or brother or mother, killed by a land-grabbing, cattle-rustling, Badman who must now be killed in the movie’s shootout finale on Main Street. So it was easy enough for me to project (beyond the terminal bodies in the dust) the slew of young ‘Badboys’ and girls procured  by the corpses of their kin into exacting revenge on the Unforgiven hero…

Fastforward forty years and Hollywood scriptwriters are no longer learners. Movies are now in three-dimensional colour, but characters are still fall roughly into the Quick and the Dead. As in years past, they are still swiftly delineated into The Good, the Bad and the Ugly. First our sentiments are engaged, and then the shootout. This time, although limos, helicopters and jets have replaced horses, and heat-seeking missiles have replaced six-shooters, the Russian, African, Chinese, Arab Badman still crumples into the dust (or exits in a fireball) in the final scene. In his thousands. And my elderly imagination still follows their corpses, and ashes, home.

My generation of cowboy movie watchers now occupy state houses across the world. They watched our old cowboy flicks as the script writers intended them to, with their minds disconnecting at the corpses in the street. I read their cowboy swagger as they walk up to the microphones at press conference, showing True Grit. I know the phrases now so well I can read their lips.

‘This town is too small for both of us,’ they say.
‘See you at High Noon, on Main Street,’ they say.

Unfortunately real life is rebellious. Badmen do not die on schedule at the end of 90 minutes, or 90 days.

And even when they do, and our cowboy movies end happily, there is always a sequel by a scriptwriter specialising in horror movies.