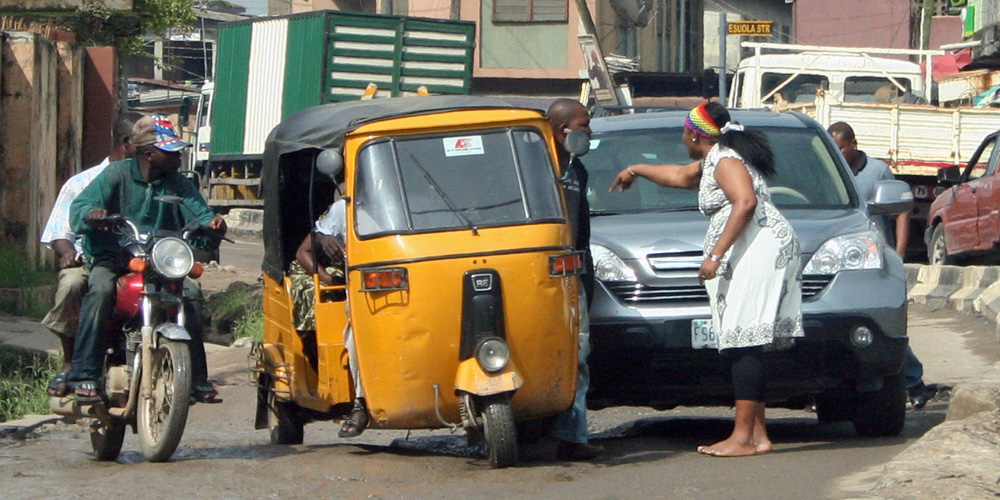 My faithful readers might recognise my fifth photograph of December because it features in the 9-picture collage on the cover of How to Spell Naija in 100 Short Stories (Vol.2). Why did this picture rep Lagos in a collection of 100 short stories on Nigeria? Kinetic compression. It is a freeze-framed short story in its own right. Let’s call it #TheLagos. Shall I break it down for you?

Her feet are Naked.

She had left home in her elegant pumps, of course. Once behind the wheel of her car, she had kicked off her shoes as usual for her school run. She felt a flush of schadenfreude at the sight of the traffic jammed solid on the opposite lane, then she remembered she would soon go home that way and sighed. Next thing, she was in a pothole the width of the road and heard the crunch on her right fender. At that point, the least of her concerns were elegant shoes. The new SUV was her fortieth birthday gift to herself! She thought she had spent all her vexes on federal, state and local governments screw-ups, then this… She jumped out raging, barefoot…

Lagosians are poor theatre-goers because they get all their theatre, like their groceries, in traffic. No accident scene is complete without that traffic-clogging amphitheatre of onlookers. Cars even pull up on opposite lanes, not to offer first aid or assistance, but to look. Alhaji Lookman is first on the scene. His family is on their way.

Qualifications of a Lagos Keke-Rider

Notice the extra passenger in the front seat? The Lagos trike rider is an overload specialist, fitting in four passengers like a regular saloon. He aggressively cuts in front of cars with ten times his horsepower and fifty times his second-hand value. And (when the accident happens) he can swivel from abusive aggression to remorseful sorrow, even when angry fingers are inches away from his face. (Next scene – if this fails to earn him forgiveness? The rolling prostration.)

One Woman’s Misfortune, Another Man‘s Fortune

Our heroine’s bad day is about to get worse as a street entrepreneur takes an investment interest in her phone and handbag. In Lagos, a cool head and a sharp eye in the back of the head are key to survival.

The Politics of Friction

Above the dueling citizens hangs the campaign poster of one of the political class whose failure to fix the roads has brought grief to all road users in this photograph. But then, Lagos is an economic fission reactor of human misery powered by citizen-on-citizen violence, generating stupendous economic power for those in the control room.

Go on with one Nigeria

And this is How to Spell Naija… Cue the ironic national anthem as we draw the curtains (in the colours of the flag) down on #TheLagos drama.

26 more photographs to go on my #31DaysofDecember challenge.