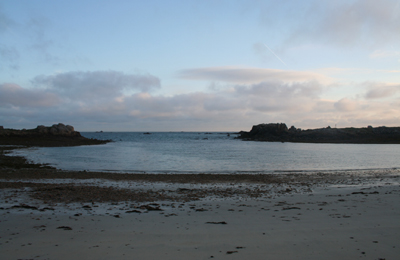 I rise with the dawn and leave for the beach to find myself a thinkstone.

A couple of questions might also arise here: what is a thinkstone, and why would anyone want one? Thinkstones help people think, and I need one the way some will need a cigarette or a cup of tea. Some people doodle, others sharpen sharp pencils; I want to do something inarticulate with the hands while my mind orders thoughts and sentences – that sort of thing.

Even when the mind is spinning off sentences like a kite reel in a gale, when the lead is flying across the page or the keyboard singing that beautiful clatter that signifies a mind in full sail, those who have suffered Repetitive Stress Injuries as I have will know the wisdom of pulling back every so often to exercise a handful of fingers on a stone. Perhaps a coin will do just as well, but a modern coin is aggravation for big fingers. Besides which you will inadvertently spend the damned thing – you think through half-a-novel with a lucky penny and then inadvertently spend it on toilet tissues. No chance of that happening with a stone.

So there is a vacancy on my desk for a thinkstone. I rise with the dawn to fill it.

I am three minutes from a bay. The sea had discovered a soft spot in Port Soif, Guernsey. Over time, its onslaught had sculpted this lovely bay, white of sand, grey of craggy cliff. Nature has not been without its abettors. The canny eye will see the hand of man in the range of granite rocks shoring up the grassy verges that scarf this beach. It is a place that is easy to visit, difficult to leave.

This morning I walk right up to the lips of the quietly snarling sea. The darkness is just lifting. I watch the sea rise from its low tide. Each sullen lap drives me backward, step by necessary step, taking back territory with Darfurian vengeance, and all the while, around me, the raucous gulls called, bird to bird, their placatory intervention washing over sea and helpless man like United Nations peacemakers negotiating at a slaughter. The vast beach grows smaller, inch by relentless inch. By high tide it will be owned mostly by sea, although there will still be that white fringe, wide enough for white frolic, where the feeding gulls will celebrate the success of their sagacious mediations, but the larger expanse of beach will have been swallowed up by She that owns Him. For a time at least.

I go on. Even at this early hour there are three or four souls about. Still it is a huge estate for three or four souls. None of them are engaged in the soul-searching business that would have engaged the average dawn denizen of a Lagos beach. God is not publicly sought on the beaches of Guernsey. I pass these souls by a wide margin. It is a big beach but it is early. People leave their homes early to purchase space. I take a few hundred square metres of space, and I give them space. But I watch.

One has come to dig the early worm. There is no hobbyist quite as obsessive as the fisherman. Even at a hundred darkened metres, who can miss the glint in the eye of this digger? One has come to sit and stare, and I understand. Fellow sufferers know that there is no better place for bereaved souls than vast verandas such as this where worlds meet; where a man, squatting shiftless on one shore can try (and fail) to fill the void in his heart with all the space and sea and breeze of another world. And one has come to seek a thinkstone. None of these purposes are improved by conversation, even one as stunted as a polite greeting. I go on.

In the distance I pass a fellow dressed like me: blue jeans under brown jacket. He is digging, but his quarry is not of the wormy variety. He is digging as avidly as a child on a noonday beach, but in addition to the spade, he carries, strapped around him, a metal detector. It is true, after all: the sea is the richest grandmother of all. Were she merely to retch here she could beach such a weight of wealth as to crash the commodity markets of the world. But she won’t. A coin a week is all he needs to find to keep returning here in dawns like this. He has several holes behind him already. He has ear muffs on his ears and eyes deep in the trough he is digging. As I watched, he finished his sixth dig, slung his green sieve, and, following a disc that jinks to and fro like a dog on a leash, he set off in search of a seventh. I have seen more evocative Roman coins than he will find today. I go on.

I am heading for the far reaches of the beach where there are strewn some fifty square metres of rock and pebble. This is the rock garden of the landscaped bay. Rocks and stones and the odd broken china of every size and texture, shape and description. From tablets the size of gravestones to pebbles for skimming the surface of the sea, here they were. If I did not find a thinkstone here I would have to visit the graveyards of Rwanda – but then, the memories of a Rwandese stone would likely drive a musing writer to suicide.

Slowly I grow the metal-detector-man’s avidness. As I bend to my task I find a little of the play of youth return. I had glimpsed it days earlier in a septuagenarian couple up to their waist in the surf, a dog between them, tossing a ball to and fro with all the frolic of ten-year-olds. Here is a wealth of stones calling the fingers to pick and turn them over. Stories to tell. Feelings to share. Touch. Tell. Feel. Long and round stones. Smooth and rough. Sharp. Heavy. Coloured. Dull. Eventually, I have three finalists in my hands. The one is exquisitely lovely. Almost a precious stone. Nature at her most excellent. Yet beauty is a feast for eyes, that never sates the growl of hunger. I see myself overly drawn from the drudgery of prosaic words to gawk at this stone. I take a deep breath and send it skimming into the sea. This second one has a reddish tint. I like its presence. It will draw the eye but not possess it. It has not one surface but many. It has stories to tell but will also let me tell mine. It is a strong finalist. The third is smooth and polished, almost European in a smug glorying in its perfect sheen; in its despising of the murmurous seas whose rough and tumble had polished it to so rich a lustre. I send the polished rock skimming into the deep. Then I see this blackish stone and pick it up. It is wet and waiting. I leave the reddish stone in its place. I go.

I walk a mile. The sun now owns the day. I find a weathered bench and table to watch my thinkstone dry. A sixtyish man walks down the path. It is a tricky moment always, that moment when a perfect stranger passes you on a quiet path. You never quite know how it will go, do you? You could both do the nodding thing: one curt nod apiece, with a smile or a grimace tossed in and that’s it. Today, Jeff really smiles, and we talk. He was born on this island in the ’40s, lived here until he was thirteen, before moving with his family to the north of England. His parents were evacuated from Guernsey for Hitler’s war but returned, with peace, in time to birth him here. He has never got these beaches, this peace, this Guernsey out of his blood and returns again and again. As we speak his eyes rove hungrily over the landscape. He is seeing more than the beauty, and I see the marriage undivorced between man and land. The Middlesborough of his daily sojourn cannot own him as this land does. Hitler had occupied this land and spilled her people across the channel and the world. Jeff’s father was a returned refugee. Jeff now has a child and grandchildren here, this friendly man, and we chat for what seems an hour, because you never quite know what you will find on the beach, this heart-warming refugee story. Yet, Hitler’s spirit is cultured and appeased in hundreds of state houses across our world today, cleansing communities and nations, wrenching off survivors and their progeny into permanent exile, into refugee camps approaching the deprivation of concentration camps, never to see their native land again.

Guernsey, like every other land, has a strange relationship with her estranged children. Many a Guern will rarely leave the parish of his birth, or having left, rarely be able to return. Jeff, fortunate Jeff, goes on.

My stone is dry. It is big and heavy, some 6 cm at its longest, 3 cm at its shortest. A thinkstone for big fingers, this. It is not a rock you should have in your hands during a TV report on Daniel Arap Moi’s stolen billions, if you value your television. And it is substantial. Good for tossing from hand to hand as you toss ideas around in your mind. I sit it on my fluttering page and it authoritatively kills the breeze. It is ugly. Real. This is Nollywood, not Hollywood. There is nothing CGI about my stone. It has more raw facets than I can count on my fingers, with no two the same. I will not quickly know this stone, not easily be bored with it. And fortunately, it is not doctrinaire black. It is dressed in a mottled shroud of grays and already the faintest grease of my fingers is lending new tincture to its tint. A stone that takes as good as it gives. I feel up the roughness of this stone. It is a tactile man’s dream, this young stone. Couldn’t be more than a few thousand years this size. This is no pretty rock polished to a glint. It still has its unique rock face, its peculiar story. It may be exiled here in Guernsey but it is still its own self. It still bears a rough facet that will match the cliff from whence it was chipped, whether on the cliffs of Sark or Mauritania. It is craggy and inarticulate. Gruff, dour. Unamenable. Almost obsidian, dense. This one might do.

I go home. I blog this, hefting the stone at medically stipulated intervals. It seems to help. I may have found my thinkstone.

One Reply to “Finding Thinkstone”