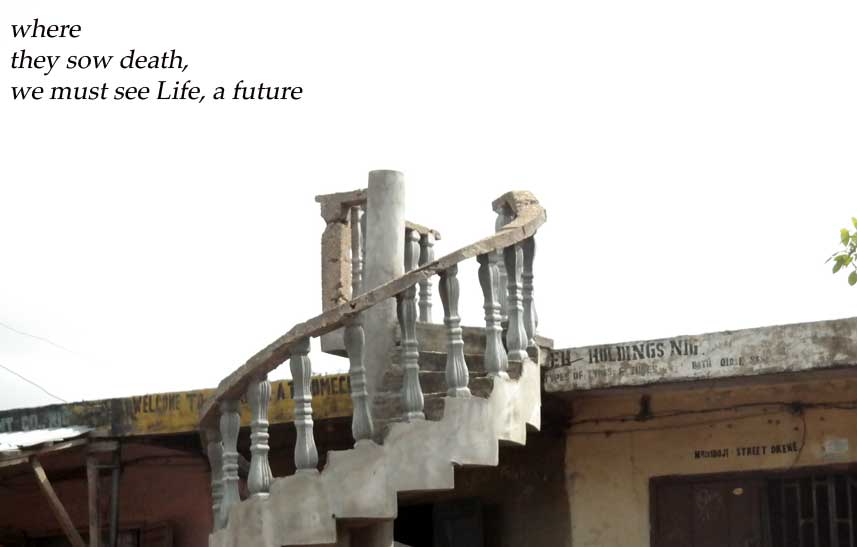 How to Receive News of Yet another Civil Bomb 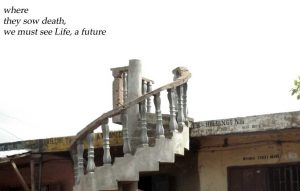 Civil war is anything but civil.

It  interrupts life rudely:  targets civilians on the way to school, to market, to worship.

The bombs are detonated by cowards in search of power, relevance,  notoriety.

We think we know grief well enough, but we don’t. We think because he has called many times before, he will treat us like an old customer, offer us a discount on pain, but he doesn’t work that way.

Grief is a new monster every time.

So be ready each time the grim news come: brace yourself, roll with the pain. A branch breaks off the iroko of nation. It rustles to the ground. Grief is the spade with which we bury our pain.

Yet, what about Despair, Depression? Hopelessness? Anarchy? Blind Hatred?

They are excluded. It is our light that extinguishes the darkness of the enemy. When we mourn our national pain as one people it will not break us. And we retain our ability to fly above the quicksand and the snares of  the evil in our midst. These negative emotions will fill our bones with lead. Those reactions enlist us in enemy’s forces. We reject them.

Do the  murderers kill people who would never have died? No.

Therefore they are as irrelevant as flash floods, mudslides, and man-eating hyenas to the irresistible progress of humanity. And here lies the insignificance of these quislings whose courage is a bomb, who live in darkness, who boast an all powerful God but have to fight his battles as if he were an invalid, who preach love but kidnap and murder children: they have no heritage, unless it is the heritage of termites, whose fate is to eat our dead. The cumulative history of the human race has no record of Death. Only of Life. We raise our tombstones to our Dead Beloved, not to Death. When we look back a thousand years, we will gloss over the flash floods and the mudslides and the cowardly curs who yap at the heels of our doers, our makers, our inventors, our lovers, our nurturers. Our memorials are to those who Live, not to those who kill. Not to the murderers that hurry our loved ones to graveyards that are the destination of all humanity anyway.

In a civil war, civilians are the inadvertent warriors.

Sothe best memorial for our warriors who have fallen is to win the war in whose cause they fell. That is why we cannot entertain Despair, Depression, Hopelessness, Anarchy or Blind Hatred in the aftermath of the news of yet another civil bomb. The innocent blood of the thousands who have been murdered stipulate our common justice on their killers and their cause. Our attitude must be  Resolution, not Despair. Engagement, not Indifference. We must wake up as from slumber. Here are the things we can and must do Immediately.

The new rapacity of death should give us a radical propensity to live, and to live more courageously. At last, our backs have found the wall. We must push back. Or die.