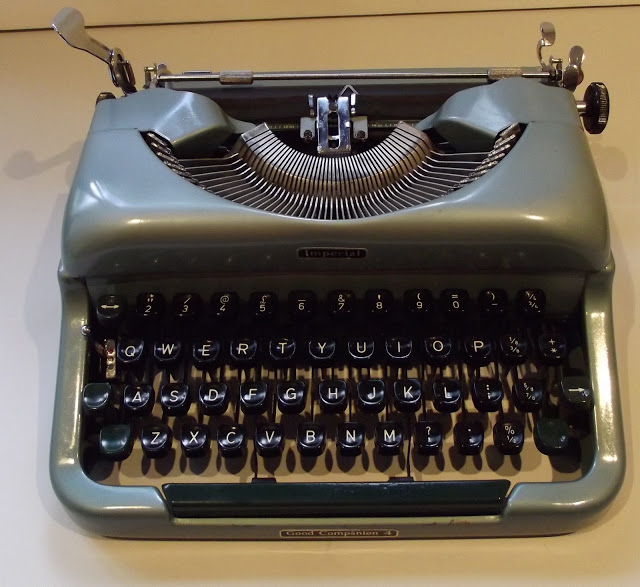 Okay, I have a story in my head that refuses to be reduced to paper unless it is hammered out on an Imperial 90 manual typewriter. *Sigh*. Anyone with a machine that works like a song I can buy [or permanently ‘borrow’ 😉 ]? I promise to treat her lovingly after the tale is told. A mini-museum in mind.

My early tales were scripted to the clatter of metal on platen. Nothing like these latter-day computer keyboards that twitter in ghostly silence. In the good old days the entire household knew when the writer was writing. My last machine was an Imperial 90. I also had a mobile ‘lap’ typewriter I could travel with. It folded into a neat white case with a smaller footprint than my current Sony Vaio laptop. And it could do something my Vaio cannot do (sorry, Sony). It could give me a hard copy – without electricity, USB cabling, printers, toners and the rest of those shenanigans. Of course its key stalks were as flimsy as spaghetti. It was okay for a letter or two, but in order to disconnect your mind from machine, to focus on your story and leave your fingers to the mechanics, you needed a sturdy, professional machine. The Imperial 90 was one such.

I learned touch-typing on an Imperial 80 and banged out the first drafts of Dangerous Inheritance on a sweet Imperial 90. The best meal to eat, prior to a typing session was of course appropriately accessoried pounded yam. The finger-work in the finessing of yam balls was excellent limbering-up exercise, and all those calories were useful in pounding out inspiration. Especially if you were taking carbon copies. Took me months of practice to pack enough punch into my left little finger, and my ‘q’s. ‘a’s and ‘z’ stayed ‘ghostly’ for ages. I probably totaled my first computer keyboard with all that pounding on its sensitive keys. It took me ages to learn to ‘caress’ computer keys rather than ‘rap’ them.

I remember the deeply satisfying ritual of the carriage return! Today I tap an anemic arrow key on the Vaio to start a new line. It is noiseless, effortless (and so Repetitive Stress Injury-prone!) back then I had to crank the silver lever and push left-to-right to return to the left margin. The ratcheting sound which rewards every typed line is almost as sensual as that of the film advance lever on my equally manual Mamiya RB67 medium format camera… & this is exactly what the RSI-specialist would order. There is a rhythm to manual typing and it is easy to tell a hack typist from a fluent expert: just listen to the clatter of type on platen and the ratcheting carriage returns. Is it music or noise? Is it poetry or spam?

She never broke down, my Imperial 90 (since this is a nostalgic piece, let’s overlook those daily instances when three or four typestalks got into a ‘me-first’ argument, an inch from the paper, or when the ribbon spool failed to advance so that the ink faded out… or when it insisted on double-spacing rather than the single-spacing you set…) and I did not know what a typewriter repair shop looked like. But I can imagine what a typewriter graveyard feels like. And I want her back, my old manual, to seduce this tempting tale onto the white of paper.

And thereafter to stand in my hall, a testament to typewritten thought.