Jamming with Books in Lagos 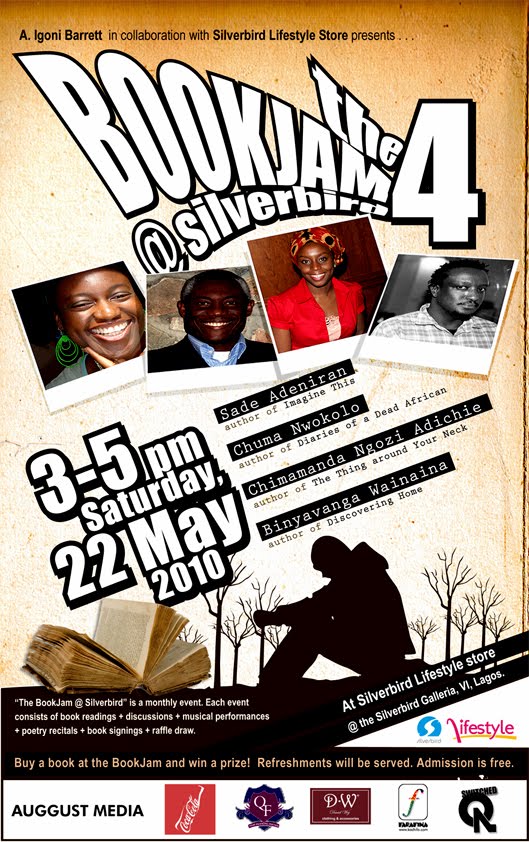 In the past, the average Lagosian would have had precious little interest in Icelandic affairs, but this is May 2010, and the world is what it is.

If frigid Iceland can keep it’s temper in check – and desist from volcanic eruptions for the next few days – I should be able to keep an appointment with books in Victoria Island.

“The BookJam @ Silverbird” is a monthly event that consists of book readings, discussions, musical performances, poetry recitals, book signings and a raffle draw. At each edition of the BookJam you have the chance to meet and discuss with some of our finest writers—and you might win a prize too, if you buy their books.

The BookJam is hosted by A. Igoni Barrett and the Silverbird Lifestyle store.

The guest writers for BookJam 4 are:

SADE ADENIRAN is a graduate of the University of Plymouth and also spent time as an exchange student at the University of Massachusetts. She has written various pieces for theatre and her work has been performed at the Lyric, the Bush and the Riverside Studios. She won the “Best First Book Prize” (Africa Region) in the 2008 Commonwealth Writers’ Prize for her debut novel Imagine This. She lives and works in London, and is working on her second novel.

CHUMA NWOKOLO is a lawyer and writer. He was writer-in-residence of the Ashmolean Museum and chair of Leys Newspapers, Oxford. He is the publisher of African Writing magazine. He has written short stories, novels and poetry. His story, Diary of a Dead African, was chosen by La Internazionale as one of the 3 best stories worldwide in 2003. He lives in the UK.

CHIMAMANDA NGOZI ADICHIE is the author of Purple Hibiscus, Half of a Yellow Sun, and The Thing Around Your Neck. Purple Hibiscus won the 2005 Commonwealth Writers Prize (Overall Winner, Best Book) and Half of a Yellow Sun won the 2007 Orange Broadband Prize for Fiction. Her latest book, The Thing Around Your Neck, was shortlisted for the 2009 John Llewellyn-Rhys Memorial Prize. She lives between Nigeria and the US.

BINYAVANGA WAINAINA is the founding editor of the literary magazine Kwani?. He won the Caine Prize for African Writing in 2002 for his story Discovering Home. He is currently a Director at The Chinua Achebe Center for African Writers and Artists, Bard College, Annandale-on-Hudson. His writing has appeared in the New York Times, the Guardian, Granta and National Geographic.

Admission to the BookJam is free. Members of the audience who purchase books during the event stand a chance to win a special prize in the BookJam raffle draw. Any questions about the BookJam should be emailed to auggustmedia@gmail.com