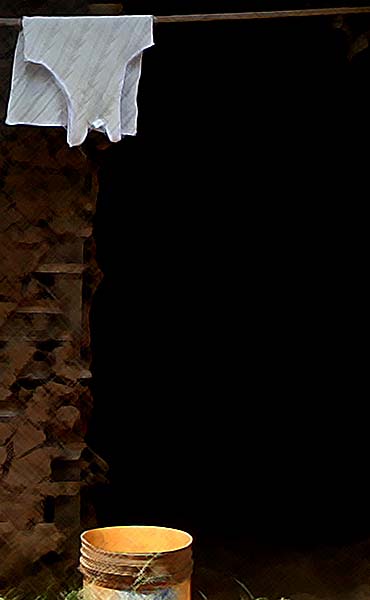 Lessons They Didn't Teach Me in Tourism School

It was the first night of my internship.

‘Are you sure?’ I whispered. From my customer’s bristling nostrils, I glanced down the corridor to the young woman standing nervously at the door of room 13, ‘that is: really, really sure?’

‘No I’m not sure,’ he snapped sarcastically, ‘I’m dreaming. For God’s sake, look at my arms! I paid three thousand naira for a room! Just see the rashes on my skin! I want a refund!’

‘Em… let me talk to my manager.’ Reluctantly, I dialled the manager’s mobile. It was already midnight but my two-year training had not prepared me to defuse this order of fury – and my internship would end in the morning if I made any unauthorised withdrawals from the cashbox.

‘Demola,’ snarled the manager in my ear, ‘What’s it this time?’

I put my hand over the mouthpiece and whispered the embarrassing complaint.

‘You are phoning me because of bedbugs?’ he shouted incredulously, ‘This is why I don’t hire interns! What will you do if they see a rat? Call the fire brigade?’

He was down in the reception within the minute, dressed in his black and whites. I could see from the missed buttonhole at his neck that he had already stripped for bed, and he had dressed up pretty hastily… or angrily. I swallowed. I was not looking forward to the collision of angry guest and angry manager over the head of nervous intern.

‘What’s the problem, Sir?’ asked the manager, inflecting the ‘sir’ at the end of the sentence as if it meant, ‘idiot’.

‘My bed is full of bedbugs! I can’t believe it, I paid good mone…’

‘BEDBUGS?’ spluttered the manager. He seemed to take the allegation very personally. I winced as the door to room 6 opened and a half-naked man looked out. It was a terrible word to speak out loud, and here was a hotel manager shouting it in his own hotel. My lecturer at the Tourism School had taught me that serious complaints should be retired as quickly as possible to a back room where it could be resolved without damaging the hotel’s reputation, yet this manager didn’t seem to mind how many of his guests overheard the complaint. ‘BEDBUGS? In a hotel that I fumigated two days ago?’

‘Maybe you have detergent allergy,’ said the manager, as the door to room 17 cracked open, ‘There’s no bedbug in my hotel! Bedbugs!’ the guest in room 6 was now scratching his arm nervously, ‘it is a common allergy. Demola, get this customer another bed sheet.’

I tried to slip out from behind the reception desk for the bed sheet cabinet but the irate customer was standing in my way, thundering, ‘Don’t treat me like a bloody idiot! Look at my arms! These are bedbug bites! These are not allergy-‘

‘I didn’t inspect your skin before you checked in, Sir,’ said the manager insolently, refusing to look at the offered arms, ‘so there’s no point. And I’ve never seen bedbugs myself, so I’m not an expert on their rashes. I specialise in my hotel business and in this particular hotel, there’re no bedbugs. Bedbugs!‘

A woman swaddled in a bed sheet joined her man at the door of room 17. She had smudged lipstick on her forehead and was chewing gum as though she had missed her dinner. ‘Is it infectious like chicken pox? ‘ she whispered to her partner, in a voice that carried.

My irate customer glanced around. Several disapproving eyes were now observing a drama that was clearly shortening their already short time. Someone’s mobile phone rang. A discussion about a delayed container floated up the gloomy corridor. In a lower tone, the customer grumbled, ‘All I know is that bedbugs bit me, that’s all.’

‘Okay, so what do you want?’ asked the manager, ‘Refund?’

The customer shrugged, he was looking much smaller than he had at the beginning of his complaint when he was ballasted by rage. The manager grabbed his register and turned it around. ‘Room 13… ‘ he ran a finger down the time column, ‘…thirty minutes? Thirty minutes! Is that the refund you are looking for? Refund for thirty minutes?‘

The customer said something indistinct.

‘What?’ demanded the manager.

‘I said you don’t need to shout, all I want is what is fair. You can give me another room for the remaining thirty minutes, I don’t mind.’

‘So that you will say you saw a cockroach and disturb my sleep again? No, Sir!’ he slammed a hand on the reception desk and for the first time I noticed a small rash on his forearm that looked suspiciously like my irate customer’s. ‘This is Sammy’s Short Time Hotel. What fits you is Sheraton Hotel. Demola, count his useless five hundred naira and give him, let me go and sleep! Thirty minutes refund!‘ The manager marched angrily upstairs, looking a little comical in the bathroom slippers he was wearing under his formal trousers. I opened the cashbox and counted out the money but when I looked up the customer had disappeared.

I looked down the corridor. The spectators were returning to other distractions as I watched; when the last door closed softly I hesitated and pushed the money down my own pocket.

At the hotel entrance stood a new couple. ‘Can I help you?’ I asked.

‘What’s this about bedbugs?’ said the man truculently. It was obvious that he had caught the last of the exchange.

I took a deep breath, and I was mustering every apologetic dissimulation of my hospitality training when it struck me with the lucidness of revelation that I had nothing to be embarrassed about: these customers were not kings, they were shrimps. They were roaches hiding under the stone of Sammy’s Short-Time Hotel. In a tone laced with the manager’s sarcasm, that would have given my lecturers a heart attack, I replied, ‘Look, did you come to buy bedbugs or short-time?’

He glanced at his partner whose lips were a thin line uninterested in a bedbug conversation. ‘Short-time,’ he said meekly, ’till 2 o’clock.’

I pushed across the key to Room 12, as well as a broken bar of soup and a wad of tissues. I glanced at the clock. It was a quarter past midnight. ‘That’s two thousand naira,’ I said, and he paid up.

I sat back down, feeling quite the graduate. My masterclass had lasted only a quarter of an hour.

6 Replies to “Lessons They Didn't Teach Me in Tourism School”