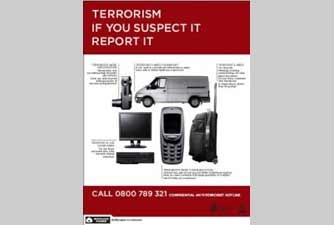 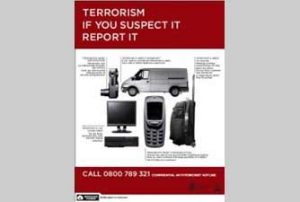 There’s a natural mystic
blowing through the air…

It was not enough to make him a terrorist, that was true. Many times I’ve also found myself muttering the same jingle hours on end. Yet, this man kept on at it, over and over, from Debden when he pushed past me onto the almost empty train, on through Buckhurst Hill, past Woodford and on to Leytonstone.

My worry grew. – And it wasn’t just the particularly dangerous lyrics of the Bob Marley song. It was the rather unintelligent skullcap he was wearing. Who would wear such a perforated cap a couple of days after Osama bin Laden’s head was perforated, if he wasn’t an insane fundamentalist out to avenge his mentor? It was also the rucksack that weighed him down. True, every other person on the train was carrying a rucksack. Or a briefcase. But there was also his whole countenance to consider: He was glowering as though it was the end of the world. I mean, Prince William and Kate had just married, bin Laden was dead, what was there to be so miserable about? I brought out my mobile phone and fiddled nervously.

I had watched a programme about this the other day. Better a hundred false alarms than one bomb and a had I known, the talking head had said. He was a retired MI5 agent; a veteran of many plots. He said he had loved false alarms when he was in service. False alarms were what the job was all about. False alarms were jobs for the boys, cash for the budget, and there couldn’t be a real alarm without a false alarm, could there? Yet, a false alarm today would be such a nuisance for me personally; perhaps the cops would want an explanation. I preferred to do my fingering anonymously, but they would trace my phone of course, and probably call me back in the middle of a high-risk stock transaction… yet, I had solid grounds for suspicion, so I didn’t need to fear. Did I? Their posters were pretty clear: ‘If it looks suspicious, say something…’

I just couldn’t afford to die today. It was a good life, mine. Okay, so I have a dodgy heart, but there were compensations – new job, new car, new house, new chick… Many more will have to suffer, many more will have to die… why was he singing out loud. This was the London underground. It just wasn’t done. If he wore headphones one could assume he didn’t realise he was articulating, but there he was, no ‘phones, staring fixedly ahead, and muttering… don’t ask me why…He did not look like someone who’d had a great life, or who had any decent prospects ahead of him. Those dreadlocks didn’t look like they had seen water since Princess Diana died. His scowl was too deeply etched. Indeed he looked like someone who had not seen anything to smile about for quite a while. He seemed the perfect candidate to be carrying around a suicide bomb looking for a staircase to a few dozen virgins. He was still sweating from his race to catch the train and yet his overcoat was tightly buttoned up to his neck. Was he hiding a very dirty collar… or was he wired up to the neck with dynamite…

I looked around me. Our coach was still only half full. I was getting pretty nervous now. We were pulling out of Leyton. Very soon the train would go underground and it would be too late to use the phone… The Rastafarian looked at his watch. Was he part of a time-syndicated team? Was he waiting for a busy station like Oxford Circus to detonate his bomb? Our directors had given the government the finger and signed our bonus cheques. I was due to take a cruise to Malibu later in the month. Two weeks of sun and cocktails. Despite the economy it was a bloody good life. I swallowed. I could not take the risk.

All they needed was the station, the line, and the direction of travel. That was what the security agent had said. My text was written in forty seconds. I always had quick fingers. When I fingered Fusil in the office it had been swift and surgical, and nobody knew till this day. With this one, I couldn’t hide, but they were duty-bound to protect my identity, weren’t they? It was there in the law. Still I hesitated… then, with only seconds before our train disappeared underground, I pressed the send button and the deed was done.

Plain clothes men joined our coach a few stations down the line. They were good, though: the first I knew of their presence was when the terrorist went down like he had a heart attack. They must have tasered him or something. Next thing the train had screeched to a halt and his rucksack full of dirty laundry was split open from top to bottom. Turned out he wasn’t wearing a shirt under his coat. Were people that broke? False alarm then. He was on the ground, still jerking from the electric bolt. He will probably thank me too. The compensation they get for these false alarms beats the hourly rate at any fast food company. And if he dies, his family gets even more. Had to get off the underground and catch a taxi. The station was crawling. Half a dozen emergency vehicles and more screeching in. Thirty or forty uniforms… these were serious jobs for the boys. I was only fifteen minutes late too.

There’s a natural mystic
blowing through the air

I like to think I am beyond these distractions, but the truth is, I’m as human as the next sod. All through that day I was waiting for the cops to call, but they didn’t. I suppose that sort of start to the morning will put anyone off his stride. Couldn’t get the Rastafarian and his crazy song out of my head all day. What was this natural mystic that was blowing through the air? Okay, so it wasn’t a revenge bomb. Was it some kind of karmic law or something? Was the mystic responsible for killing birds and honey bees, for pulling hurricanes out of the air, tsunamis out of the sea? Was there a natural mystic connected to the bonuses my bank was doling out after we had blown up the world economy and gypped taxpaying suckers into reflating it – starting with the banking sector of course… it’s no excuse, but my head was so far up in the clouds that I made a couple of bum deals that day. It was a relief to finally join the rush hour traffic down into the underground.

I suddenly became aware of the unusual personal space around me. It was 6pm, and I was in the underground at Holborn station. It was standing room only. At that time of the day it ought to have been impossible for me to reach my pocket, but I actually had enough space to open a broadsheet if I so pleased. I looked around. The rest of the coach was jammed but there seemed to be an invisible force field around me. I sniffed my armpit surreptitiously… then I realised that my briefcase was the subject of several frightened stares. I had been singing out loud! The free newspapers were full of the bomb scare I had provoked in the morning, everyone would have been primed and jumpy, and there I was, singing out loud! How foolish could I get!

The irony struck me with concussive force. Yet, I was no dumb Rastafarian. There was a simple way to defuse the crisis brewing around me before someone called the cops and I reached down to open my briefcase, to expose the files I was carrying to the relief of everyone, but three men – including a giant in blue overalls – stepped insidiously into my forcefield. They did not meet my eyes but the menace in their gesture was clear: they didn’t want me ‘detonating’ my bomb! I suddenly realised that I could be lynched by terrified commuters between Holborn and Chancery Lane if I so much as sneezed. Very slowly, I set down my briefcase and waited. What was coming over Londoners? I was totally white, without the slightest Arabic tint to my complexion. My suit was mainstream and  corporate… people like me enjoyed their virgins here. We did not have to blow ourselves up! I suppose I have that blasted shoe-bomber to thank for this.

I wondered what a taser would do to a dickey heart.