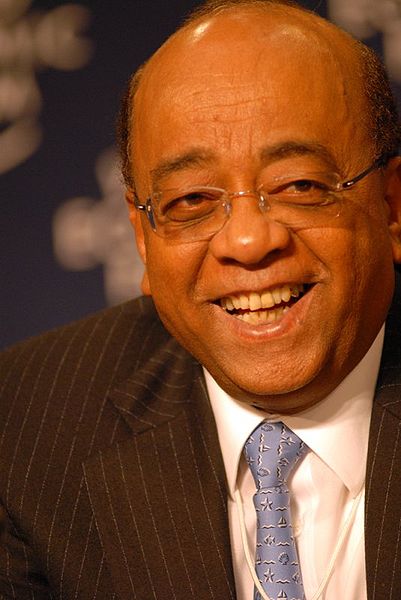 The Mo Ibrahim Prize vs. The Spoilt Brat Prize for African Leadership

Well I don’t mean poor as in bank balance… but you knew that anyway.

I mean, you have to pity the poor man. First he sets up this Mo Ibrahim Prize to recognise and celebrate excellence in African Leadership. It is no mean prize, it will pay out five million dollars over ten years and two hundred thousand dollars annually for life thereafter to one retiring, democratically elected, African head of state who has served his term in office within the limits set by his country’s constitution. Now this is no ‘kwashiokor’ prize (it is paid in US- not Zim-dollars) and it is actually the largest annually awarded prize in the world.

The ethos behind the prize is signal:  In the West – and the East for that matter – a retiring head of state has many lucrative options when he leaves office. Like Tony Blair and George Bush, he can pick up a million dollars or two from writing, or ghost-writing, his memoirs. He can take up a lucrative sinecure on one board or the other. And if he is still up for public service, he can – like Jimmy Carter and the Carter Center‘s guinea worm campaign – go about doing good. The Mo Ibrahim prize wants to address this – and so can grant a further two hundred thousand dollars annually for 10 years ‘towards the public activities and good causes espoused by the winner’.

The prize had a rocketing start with an honorary prize to Nelson Rolihlahla Mandela, just to set the tone. The 2007 prize went to Joaquim Alberto Chissano, Mozambique’s second head of state who ruled from 1986 to  2005 and then disdained the 3rd term allowed by his constitution to step down. (Now, I would have been tired myself after that stint…)  While in power Chissano helped end a 16 year civil war and you can read a citation here. The 2008 prize went to Botswana’s third president (1998-2008), anti-corruption crusader Festus Gontebanye Mogae. He oversaw Botswana’s secure position as one of Africa’s success stories and did not scheme to stick around to milk it.

Unfortunately in 2009 something embarrassing transpired: they couldn’t find a winner. This had to happen sometime of course. It was the biggest prize in the world and the laureates had to be world-class leaders… but it happened again in 2010. Two consecutive years. Fifty-three countries. 48 consecutive months. Yet, no winner was found for the prize.

So what is the fly in the ointment? Why could the Mo Ibrahim Prize Committee not find a single head of state who retired within the last few years  from a field of over 50 countries to gift ten million dollars?

The answer is a competing prize which is in point of fact, the richest annually awarded prize in the world. (You’ll have to take my word for this because the exact prize money is the most closely guarded secret in the world, with estimates being outdated even before they are wikileaked.) It is the competing Spoilt Brat Prize for African Leadership. It is awarded annually by prize committees of morally bankrupt armies, sleepy citizens, and timid neighbouring heads of state. Recent winners would include Zimbabwe’s Robert (Lose-an-Election-Throw-a-Tantrum) Mugabe of course.  The 2008 prize went to President Mwai (I’m-Going-Nowhere) Kibaki of Kenya. Ex-President Laurent (Son-of-the-Soil) Gbagbo of Cote d’Ivoire is a front-runner for the 2010 prize.

Poor Mo Ibrahim. It is hard to see how his prize can compete in the light of the commercial success of the S’B prize. He insists on retirees, but the Spoilt Brat Prize can be won by sitting, squatting or comatose presidents (cue Nigeria’s late president, who was not only in contention, but was granting BBC interviews while allegedly in a coma). The Mo Ibrahim Prize requires some degree of integrity, but the S’B Prize is an utterly egalitarian, non-discriminatory, come-as-you-are prize. Whether you are warlord or thief, if your army is unprincipled, if your people are thick enough to riot as soon as you flash the ethnic card, and if you are surrounded by meek (rub-my-back-I-rub-yours) fellow presidents who will beg you at the climactic moment to agree to an Africana-style power-sharing agreement, you are in with a chance. The bullet in the head for the Mo Ibrahim prize is of course the fate of his short list. The committee awards only one prize a year (if that). The other retirees go empty handed. Consider the S’B prize where every last contender is a winner. So long as you can avoid being eaten like Samuel Doe, if you can hang on to a scrap of country from the resulting war, you can make a decent living from war gems, aid-pipelines, and many other resource permutations.

Now with only a few days left to the year, Kofi Annan and the other committee members of the Mo Ibrahim Prize will be contemplating another bruising attempt to find a winner for 2011. This mind boggles at the millions of dollars backing up at the offices of the Prize Committee. But not, it appears, the minds of African heads of state.

11 Replies to “The Mo Ibrahim Prize vs. The Spoilt Brat Prize for African Leadership”