Population? Zero. [Day 3 Countdown to the Final testament of a minor god]

Poem of the Day: Extinction

When I was through laying out my new collection of poems, The Final Testament of a Minor God, I had cause to look through my first collection, Memories of Stone, which was published back in 2006. That was when I noticed the interesting coincidence of titles and themes: the last poem of Memories of Stone  is ‘Edge of Extinction’, and the last poem in the new collection, is simply titled ‘Extinction’. My 2006 poem (which has a videopoem version) was about the extinction of species and was influenced by my time at the Ashmolean Museum, a place where dead and extinct peoples and species came back to haunt on her walls and plinths. The poem has since haunted the buses of Guernsey. An extract:

Birds that once migrated seas
in search of sun
have now transmigrated worlds
and won’t return.

My 2014 poem is about the extinction of entire communities. The entire poem (No. 100, and the shortest in the book) comprises three lines of three words each:

on Faroe Island
is Muli village
with zero people

It was an unplanned coincidence, but a telling one. I think a lot about endtimes: the titles of my books Diaries of a Dead African, and The Ghost of Sani Abacha, suggest as much. This current volume is titled ‘Final Testament…’ I do not believe that death – inevitable as it is – is necessarily a tragic outcome. A visit, however pleasant, must come to an end sometime. Ethnologue.com suggests that the world has 7,106 languages, with 373 having gone extinct since 1950. Out of the  2146 languages in Africa, 136 are in danger of extinction. Apart from languages, countries die (Rest in peace, Yugoslavia). Empires fade away (Adieu, Songhai). Cultures come and go, plants and animals too. People are born, and people die. Death, as a fact of life. Death become tragic only when we expect to live forever, when we are not prepared to go, or release those who have stumbled into the jaws of Earth. What can be truly tragic are lives that are ‘worse than death’. What can be truly tragic are the circumstances that usher death.

In 2006, in a gallery of the Ashmolean Museum, I saw the mummified body of a child. In another gallery of the same museum I found a buried fortune in coins which had recently been unearthed from an English field where it had lain for close to two centuries. 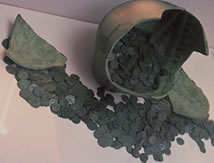 I have written about these previously (A Museum Makes you Think, Does it Not?). Those artifacts were buried separately eighteen hundred years ago. One in an Egyptian tomb, the other thousands of miles away in an Oxfordshire field. In order to mummify the remains of a child, the parents must have been rich enough to have spared no expenses, within the limitations of their era, to have kept their child alive, yet, the point can be made: about the cruel irony of a hoard of rusty, useless, coins side by side with a crushed life aborted in childhood.

Indeed, replace the hoard of coins with a Swiss bank accounts and you have a very present tragedy played out daily in the 21st century, of ill-gotten wealth salted away in Europe while the children whose lives they are meant to succour are extinguished by the hour in Africa.

That is the tragedy of extinction, whether of the premature individual, the innocent community, or hapless nation: when it is willful, immoral and needless. The fact for instance, that a community is exterminated by casual genocide, not carried out in secret, but in the media glare of the world and with the silent complacence of all. The fact that millions of children and families die of starvation while their ‘leaders’ bury billions of dollars in hoards abroad that they cannot conceivably use in this lifetime.

The ghost town of Muli village has its own special circumstances of course. It is a far-flung settlement in a far-flung Island and its depopulation was driven largely by emigration. It is not laced with the tragedy of genocide, or starvation, or medical malpractice. It was not depopulated by Napalm, Rwandese machete, Hiroshiman atomic bomb, or a Syrian mustard gas attack. It was not purged by the Pol Pot cadres that bled three million lives from the Cambodian countryside or by the soldiers that massacred Asaba men at Ogbeosowa. It was sacked neither by perverse sweep of tsunami nor paroxysm of earthquake… but it stands there, terminal tombstone to my 100 hundred poems, as marker and haunting memorial of the dead and depopulated whose words, language, music, and laughter we will never hear again because

on Faroe Island
is Muli village
with zero people