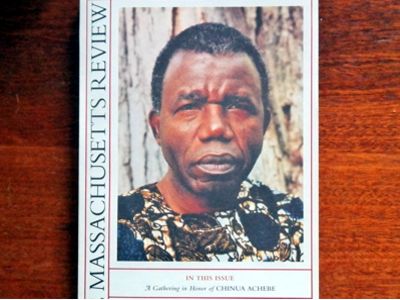 Only in a fairly minor way, to be fair. We had after all been invited to Amherst to commemorate his iconic speech, An Image of Africa, Racism in Conrad’s Heart of Darkness, which had been delivered at that same university all of forty years before. The Amherst event looked both backwards at the impact of Chinua Achebe’s paper, and forward to the shape of things to come. It was a stirring symposium, with papers from writers and academics alike, including Jonnetta Cole, Ekwueme Michael Thelwell, Jules Chametzky, Chidi Achebe, Caryl Phillips, Okey Ndibe, Chika Unigwe, Chinelo Okparanta, Maaza Mengiste, and Achille Mbembe. My own paper was The Extended Family and the Trojan Horse. It is published, along with Achebe’s original paper and all the other conference papers, in the Spring 2016 edition of the Massachusetts Review.

How he was wrong? When he said, in his book, The Trouble with Nigeria,

‘[T]he problem with Nigeria is simply and squarely a failure of leadership’.

My full answer is in the Review, and you also can watch the Youtube video of the entire talk here. 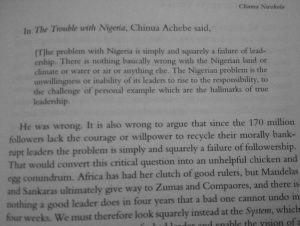 As for the storyteller’s answer, well, when I was three, my mother took me to a doctor in Jos. They talked for a while, trying to figure out my inexplicable diarrhoea. Then I started to cry and my mother pulled out a feeding bottle. ‘Who’s that for?’ asked the doctor.
‘It’s for my son,’ she said. ‘He won’t eat anything else.’
The doctor snatched and threw the bottle in the bin. ‘That’s the problem! Let him cry! When he’s hungry he’ll eat real food!’ From my mother’s accounts I got over both pap and diarrhoea quickly enough and never looked back. All of which confirms the wisdom of Achebe, you might think: true leaders do what people need, not what they want, or hanker after.

But Mams’ story did not end there: another young mother had rushed in, carrying her distressed child. ‘What’s the matter?’ asked the doctor.
‘I don’t know,’ she said, ‘I just finished bathing and dressing him and he started screaming.’

So the doctor pulled off the clothes of the sweating child. When he got to the cotton napkin, it was soaked in blood: the mother had accidentally run the baby through with a ‘safety’ pin! My mother recounted how the doctor (who seemed to belong to the Direct Action wing of the medical profession) had slapped the mother and she cried, ‘Beat me! Kill me! See what I did to my baby…’

And there’s why Achebe was wrong: even day-old babies cry when you draw blood. Not my people. On the way to the gallows, we are mute and prostrate before our murderers. We hail ‘Chief’ where we should cry ‘Thief’. The problem with Nigeria is also fairly and squarely, a failure of followers.