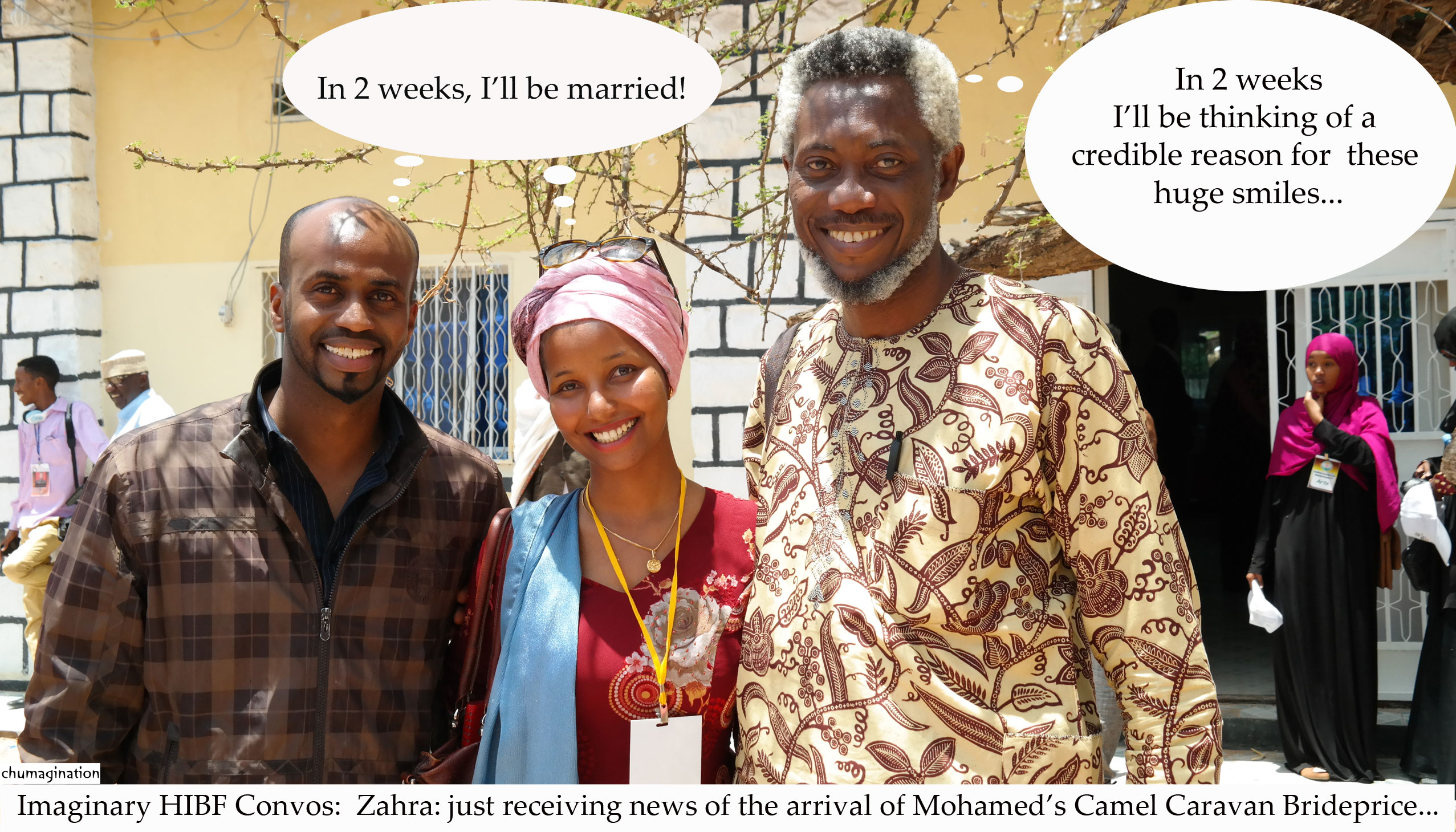 Last month, in one of her last official engagements as a single lady, Zahra Ahmed moderated my reading at the Hargeisa International Book Fair. It was a distinct pleasure to meet her and fiancé, Mohammed Elmi, again, not such a pleasure to learn that the wedding had been fixed for the week after I left. It would have been grand to have witnessed a traditional Somali wedding… a little depressing therefore to see all the exciting pictures on social media…

There was a bride price of course.

It was interesting to learn that the bride price custom was thriving in Somaliland, and that Mohammed was having to buy, beg or rustle up a fortune in camels to approach the family homestead of his wife (as she now is). Not too long ago, a tongue-in-cheek app, The Bride Price app splashed down on Nigeria’s social media scene. It was completely unPC, and if hard-core feminists had the right to issue Fatwas, it certainly would not have seen the light of day. Yet, it was also disarmingly funny, with that dark variety of Nigerian humour that made you break down in laughter when you were supposed to be criticizing the damned app. Many otherwise feminists-in-good-standing were found – not only to have visited the site, used the app to assess their marital value (they were just ‘researching’ actually), but (horror of horrors) – to have actually posted their bride price valuation certificates on their social media timelines! It was left to feminists like my friend, Minna Salami, (Ms Afropolitan) writing for The Guardian, to hold the stiff-upper-lipped anti-misogyny line against the guffawing millions that had taken the app into trend. Her chief point being that:

to claim modernity or insider humour as a reason to laugh at misogyny is something I can’t do.

Culture is of course a bitch and I have grown to see law school colleagues who argued passionately against the ‘colonial’ and bloody uncomfortable wig and gown that is the the customary heritage of the common law lawyer, triple-cursed in our tropical climate, who later embraced even heavier wigs as they grew into senior advocates of Nigeria, defending the sanctity of the honorable colonial heritage.

If you are a lady, feminist or otherwise, and you found yourself surreptitiously entering your details into the app to determine your brideprice, I expect your full and frank confessions in the comments sections below. On my part I confess that I did enter what I knew of Zahra’s bio into the app and discovered that, at N600,000+ (or some US$3,500) my friend Mohammed would probably have saved himself some camels if Nigerian technology had been incorporated into the Somali bridal process…

So yes: both dowry- and bride price-giving traditions commericalise nuptial love, but somehow I don’t see Mohammed looking at his wife and thinking, ‘My camels, o my camels…’

Have a great married life, guys.