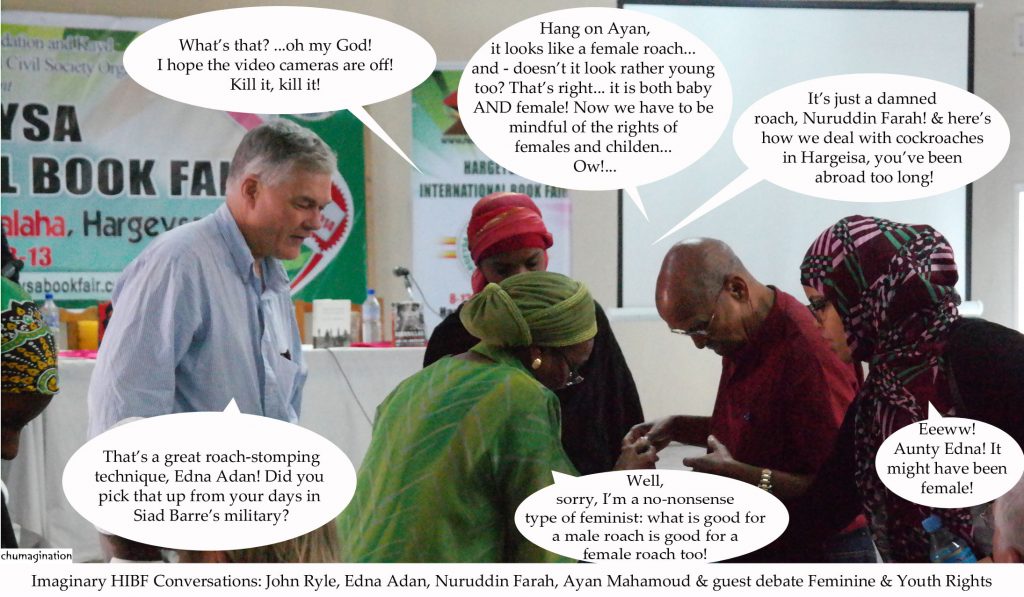 Nuruddin Farah is only one of the greatest living prose stylists. He was billed to have a conversation with Somali compatriot, Nadifa Mohamed, but Nadifa was also due to go on stage right afterwards so Nuruddin offered to make sure she was fresh for her session by having his conversation with himself. What his audience got thereafter was a window into his preoccupation with the theme of Cruelty: societies are judged by the way they treat the weakest amongst them, perennially the women, children and disabled. And themselves as it emerges.  He spoke to the theme of the patriarchy, spoke of his closeness to his mother, whose poetry he once ‘doctored’ and delivered, as a child, to a wedding audience of Somali women. He testified that everything he has ever written, he has written as a tribute to his mother. He spoke about how he, even as a forty-five year old man, could never really speak his mind to his father – because that was the culture. He believes that the egalitarianism of the Somali is superficial: unless there is loving communication between parents and children too many people will live in secret, isolated universes where they are unhappy. He thinks that is why children can be more easily attracted by groups like Al Shabab. Nuruddin’s candour was not just on stage; back in the hotel he was often to be found near midnight in knots of dialogue with guests. And he was certainly not the A-lister who jetted in for his session and jetted out after signing his books. He took in the other sessions and during the shy first few minutes of question time, he could be relied on to fire off a tough query to a young writer to get things rolling. But there was one event he missed: On the final day of the fair I urged him to take in the circus.

‘Will there be ladies in it?’ he asked, ‘Is it integrated?’

‘It was great, but I don’t remember ladies from last year,’ I told him, rashly playing the festival guru.

‘I’ll give it a miss,’ he said, and did. Which is why I have no hesitation in teasing him, in the picture above, on his pet subject.

I also got to spend time with poor John Ryle, London director of the Rift Valley Institute, who wandered into my picture just in time to be slandered, and Edna Adan, an inspirational  and pioneering Somalilander who is only incidentally a lady. Hilarious anecdote of Siad Barre trying to break her spirit when she was in army service.

If only he knew.