Something strange happened to my Teacup yesterday. 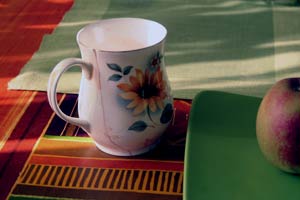 It was most odd. I had used her hundreds of times before. Live through a few British winters and you will certainly work your way though thousands of teas. (No backtalk now, you shivering Canadians and Siberians…) Anyway, I poured this terminal stream of boiling water onto my teabag and the cup cracked, spilling her guts. It was my favourite cup too, with her retentive base shaped like the cranium of a plebian, but there’s no sense crying over split tea. I put her into the bin and tried to start a relationship with a new favourite cup.

The cranium of a plebe.

I wonder if there is a scientific way to measure the outrage of information that, when poured into a plebian mind, would be guaranteed to crack her. To break him. Is there a way to gauge the temperature of information that can cause a man’s skin to burn like acid? What can a woman hear that would deafen her? What can a man read that would blind him?

Okay, health and safety warning: best fetch your sunglasses before you read the next bit. Cecelia Ibru, former CEO of Nigeria’s Oceanic Bank, was convicted of 3 out of 25 charges of fraud, and will now forfeit 191 billion naira worth of assets including 49 properties in Nigeria, USA and Dubai. She is sentenced to 6 months in Jail – except that she will start the sentence in a hospital ward in the Victoria Island’s exclusive Reddington Hospital, and will go to jail only when her doctors certify that she is fit to do so.

Of course it is not the temperature of the water itself that splits the plebian cranium. It is the vicious variation in extreme realities. Like my careless rinsing of my favourite cup in the cold water one moment, and the anxious filling of her with boiling water the next. So settle your sunshades, your earmuffs, balm yourself in a prophylactic cream and read on, if you must.

You will also be going to hospital if you steal, say a cow, in some of Nigeria’s northern states. They have incorporated Sharia law into their criminal code and will stone to death the teenager who is guilty of sex. They will amputate the pick pocket’s hand. (Hygienically of course). You will click on this link at your own risk. It does not show an actual amputation, but… the mind is a place of her own, is she not?

It is not only poor thieves whose hands are in danger in Nigeria. Rich thieves have their wrists slapped as well. Take the sad case of Olabode George, ruling party chairman and former Chairman of the Nigerian Ports Authority. The allegation http://en.wikipedia.org/wiki/Bode_George of an N85 billion scam in the Nigerian Ports Authority of which he was chairman was not exactly proved. Instead he was convicted on 47 out of 68 counts of contract splitting and inflation. Even his clout as party chief could not save him from the 2 year jail sentence. Tragic, tragic.

But not as tragic as those who pay with their lives because their desperation drives them to steal bread and stuff in market places. They steal from the hungry and angry and they pay dearly for their incontinence. Their lynching will be swift: a beating, a tyre and a premature roadside cremation.

These therefore are clear guidelines for the would-be Nigerian thief:

But be very, very afraid. For even the craniums of plebians have a breaking point. I am no prophet, but have spoken. No seer, but have seen it. Yesterday, my long-suffering teacup bled tea on my breakfast table.