How to Recognise a Third World Country… attn: Office of the Pope 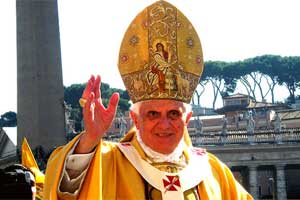 Not too many yesterdays ago, during Pope Benedict XVI’s visit to Britain, Cardinal Walter Kaspar commented that arriving in Britain you sometimes got the impression that you

were arriving in a Third World Country. That probably caused some outrage. Soon afterwards, he promptly withdrew from the Pope’s entourage – for health reasons. Father Frederico Lombardi was the pope’s spokesman. Asked if the Cardinal’s withdrawal had anything to do with his contentious comment, Lombardi issued the understandable response: the withdrawal had ‘absolutely nothing to do with anything else’.

It was the standard politician’s response… but Lombardi is – after all – the Pope’s spokesman. The response evoked this stubborn image of a white-clad figure at St Peter’s gate arguing the various technical qualifications and extenuations to the word ‘absolutely’.

No, Cardinal Kaspar, Britain is not a Third World country. There are certain sure fire ways to tell whether or not you are in a  Third World Country. I will now list some of them for your future use:

In a Third World country,

1. the foreign policy (i.e. whether or not you go to war, and when) is usually determined in another country.

2. a fair section of its press is perpetually consumed with issues of immigration and emigration, visa queues and the imminence of economic meltdown.

3.the biggest political issues are always the basic ones: schools, hospitals, jobs…

4.the Central Bank occasionally resorts to printing money (although it may use euphemisms to describe it) to get out of tight economic spots

5. once the head of state gets into power, it is usually for life. And when he or she dies, you can bet one of kids will get the job…

…er, Cardinal, I am afraid this list isn’t going too well. I will come back to it one of these tomorrows.