The Art of War vs. The War of Art 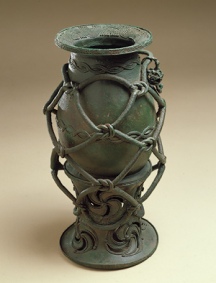 All over the world, in this gloom of double-digit recession and unemployment, the Arts are fighting a war of survival. Countries are cutting back everywhere and naturally the greatest beneficiaries of state funding will be putting up the greatest fight. All that is to be expected. The Arts, like Premiership football, is a game of two halves; the upper half of football’s aristocracy out-earns many a national budget, while the superstars of the Arts can sell a drunken doodle on a dinner napkin for a small fortune. So there will probably be some schadenfreude mixed into the public sympathy at the thought of millionaire tenors being turfed out by broke opera houses… or painters with swank basements full of canvases whose most faithful customers had been public galleries.

In the real world after all, one has first to rent a set of walls before worrying about the paintings to put on them. And yet, the Funding Question throws up the stark reality that the recession had probably started decades ago for most Arts workers. Amateur hobbyists have decimated the lower echelons of practising artists. (It doesn’t take much to become a ‘photographer’ these days. A clever smartphone is a good start and with many a prosumer camera, too many professional photographers are already outclassed by their clients – at least in the equipment stakes.) Likewise, the democratisation of the Arts dissolves the borders between struggling artists and keen hobbyists. For every successful artist there are tens of  thousands who will never be, who mortgage their lives to their dreams: actors looking for the role, artists toiling on their ‘masterpiece’ with the last light of ruined eyes… they have mastered their art, but they will never quite comprehend the brutal economics of the captured audience. And through all that, the Arts must struggle with the reputation of being the Welfare Basket Case of modern society. The ultimately useless sibling of the Crafts.

Yet, anyone who has seen ancient art that has mesmerised audiences for centuries, perhaps a Benin, or Ife bronze, or the thousand-year old roped pot from Igbo-Ukwu (pictured above), will understand what aspects of our civilisation will ultimately endure. Such a one will recognise the irrelevance of politicians and financiers over timeless art. They will also realise the mountains of chaff that have to be negotiated to find truly sublime work. Work that will survive textbooks by contemporary zealots of style. Styles that will grow out of fashion even before we are cold in our graves. Graves that will yield their treasures in millennia to come, when when our technology will be housed in the Museum of the Primitives while the best of our art will draw the same gasps of awe that they draw today.

Yet the Arts face a greater threat than recession. They face competition from the most unlikely theatre, for instruments of war are increasingly becoming  icons of art. Anyone who has ever visited a war museum will confess to the sinister compulsion to stare at those spiked cudgels, those skull-cracker tools from pre-history, those pangas from Rwanda, muskets from France… From Western defence shows to phallic missiles trundling down Pyongyang’s applauding streets, from naval reviews showing off state-of-the-‘art’ nuclear submarines to military brass bands performing with the panache of circus artists… Because military designers know that ultimately, it is the public who will pay for their toys. They know that it is the public who, with their ballot-boxes, decide where they want to get their Art from: a new season of sultry theatre, or the next round of sexy nuclear submarines. Enter the modern Air Show. This year, the 3-4 day party on the Bournemouth beaches was a wash-out… a wet English weekend took care of that, but last year the likes of a Bono concert would have been shamed by the tens of thousands that mobbed the Bournemouth Air show, oohing and aahing at athletic aircraft that smoked, streaked and boomed across the skies. What performance art could top the wing-walkers…  the beautiful Red Arrows streaming coloured smoke, the Hurricanes, the Spitfires, the steely grey Eurofighter Typhoon thundering past…

It is probably nothing more than sour grapes from a cavilling artist, this awareness that on a different beach and a different place, the crowds would also be screaming, but not with joy. And that the special-effects smoke from the aircraft would be unnecessary for all the pall and mushroom clouds supplied by actual bombs. The awareness that even this glorious rendition of sublime artistry in the skies was nothing but a practice run for war.