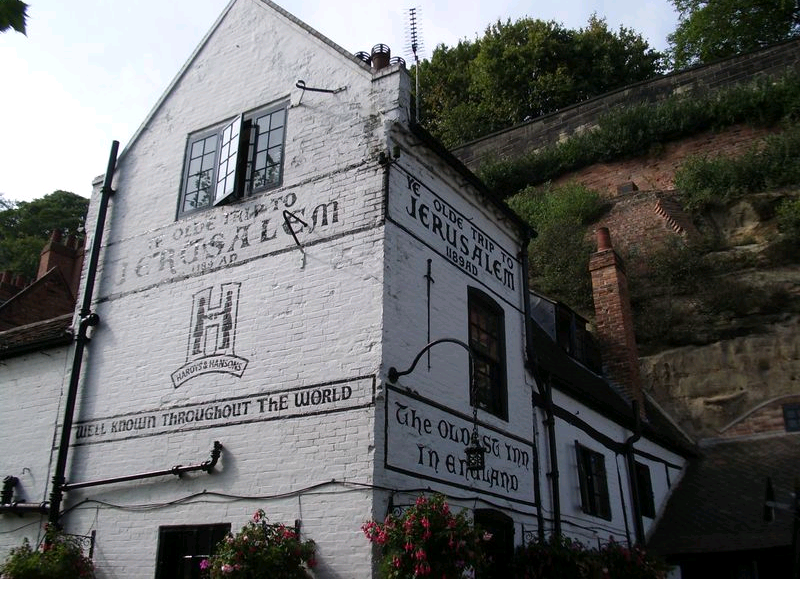 The British Pub; (a brief guide for the thirsty tourist)

Never did so much history
attend a pint of lager.

enter, ye that thirst –
but beware the ghoul

of the drunkard dead.
dead broke, he yet thirsts

for a brother’s beer

If you are ever in Nottingham, do catch a session of the Storytellers of Nottingham. These days they meet at the Broadway Cinema, but on the day I attended, close to ten years ago, their sessions held at the oldest pub in England, Ye Olde Trip to Jerusalem. More cave than watering hole, Ye Olde Trip was evidence that the Englishmen of earlier generations were much shorter, for I could not stand erect in our watering hole upstairs. It was a properly evocative venue for a performance art form that should be more widely practised. For there is a difference between a writer reading his story, and a storyteller telling a tale, with neither tablet nor novel to hand. This is the writer qua raconteur. Perhaps the performers of that day were particularly good, but who fetches water and oil knows – of the twain – which is the heavier!

And pubs as well.

It’s not just about the beers, you understand? I am probably a junkie for antiquity but there is something about all that elaboration appurtenant to the pulling of a pint. The pub’s accommodation is typically large, dating back to a century when land was not yet gold. The pub’s patron is walled in by wood panels. With brimming glass, he settles in a deep armchair that his teenage father probably used. He feels… tenured… like a landlord… as though the price of a beer has secured voluptuous accommodation for the evening. Like many other venues, the modern pub is mostly freely wi-fied, with electric points for the elderly laptop. The ceremony that attends a proper pub repast is almost ecclesiastical. In comparison the red-and-green chairs of the glass-fronted cafes and the modern revues of the English street seem to be cut from ‘half a plank’ of plastic; a foot-deep ledge of a ‘table’ skirts a wall. Wood panels? There is no wood in sight. Eat-in or take-away, you are asked, as shiny equipment of steel and glass stand ready to spit your grub into the paper bags or plastic trays of your choice. A bucket and mop wielding cleaner is sweeping up the chips you haven’t yet dropped. You almost feel obligated to wolf your food and drink and join the conveyor belt in and out of the bustling establishment.

But a thirst is a precious thing to waste. As for an appetite… well, everyone knows how criminal it is to abuse a healthy appetite. So a patron will chose his pub with care. The names are beguiling, some deceptively so. By working really hard on the British stomach, a gastropub group has managed to excite salivary flows at the sight of the disgustingly named The Slug and Lettuce. Every pub’s name tells a proud story, The Lamb and Flag, The Red Dragon, The Dog and Duck, The Slow and Easy, The Red Lion, The Spread Eagle… Some are good for a drink and a premiership game over a friendly conversation. Some will have a darts corner, a billiard table. Others can douse an urgent hunger… though the fried-from-frozen fish-and-chips that emerge from the kitchen without a presaging aroma will remind you of Joe Blogg’s exertions during his missus’ annual Spanish holidays.

So one size does not fit all. On this point it is a great idea to follow the crowd: however seductive the menus, never order a meal in a pub where nobody is eating. Never. Always trust the locals (except perhaps on the subject of Marmite.) If you are mad with hunger, it is probably safer to abase yourself next door where the resident owner of the Chinese takeaway might be persuaded to sell you an early chow mien. But if you find serious diners addressing honest food, or if you stumble upon a carvery where happy families are to-ing and fro-ing from sumptuously-laden buffet spreads, do feel free to pull out your wallet.

You have probably travelled long and miserably on the London underground and formed an unfavourably bleak impression of British conviviality. It is true that provoking conversation with people staring fixedly at their novels, Kindles, Iphones and Samsung tablets will open you up to charges of ‘sexual harassment’. But if you loiter at the bar of a British pub you will probably find yourself embroiled in impassioned conversations with perfect strangers. Again, a modicum of common sense is helpful, if the pub is in proximity to a golf course, you should be appropriately dressed and up to speed on George Osborne’s relationship with the new Governor of the Bank of England. If you are getting the cold-shoulder it probably has more to do with the holes in your jeans, rather than your touristy accent. Even if your jeans are designer-tattered, they will probably be more at home in a pub next to the local university.

On a final note, if you ever find yourself in an Arsenal pub on match-day, bite hard on your Mancunian tongue. You know how you have always fantasized about being a spy and undercover agent? This is your chance to practice. Boo your team’s goals with gusto, and don’t sneer when your lager-loosened drinking companions boast how the premiership silverware is coming ‘home’ to the Emirates Stadium this year. And definitely don’t mock Arsenal’s goal-keeping prowess (or lack of it).

Tony Blair did not need that much provocation to invade Iraq.

One Reply to “The British Pub; (a brief guide for the thirsty tourist)”