The End of Failure 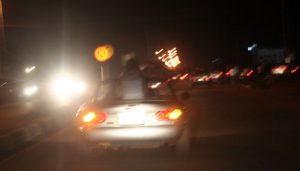 Kentua returned home to the strange glow of streetlights. An oppressive joie de vivre blanketed the neighbourhood – there were bright lights everywhere he looked and yet, no generator racket. It was a disquieting reversal of reality. He opened the door of his one-bedroomed flat and nodded uneasily at his wife. ‘They still haven’t taken light?’

‘Praise God o,’ said his wife, without lifting her eyes from the Cockcrow at Dawn rerun on TV.

In the bedroom, he placed an orange on the floor to plug in his phone, but it was still fully charged from the night before. When he looked up his orange had rolled south into the corner of the room. It was their seventh successive night of seamless electricity. And it was full current too, not the useless candle-power current that just appeared like a red stain on the lampshade, which still required the use of torches. There were no fluctuations: the picture on the TV did not flicker and the fridge compressor did not judder and cut out. It was as though the PHCN technician in charge of load-shedding had taken ill, leaving the neighbourhood switched on for one week and counting.

This unprecedented good fortune was so undeserved that it scared him. What if they found out about the error and angrily switched them off for months on end? Away from the clammy sentimentality of Cockcrow at Dawn, he sank onto the bed in a cold sweat. He turned on the fan. Normally he barely got to use the ceiling fan two nights in a week, yet here he was using it seven days in a row! It was almost as though fate was trying to compensate him in advance for some impending calamity. God knew he had potential calamities aplenty– a sickly octagenerian mother in the village whose death would bankrupt him, a boss who threatened to sack him twice a week, and his sinking apartment which was built on marshland – with a 9 degree southward tilt already… He threw himself back on the bed, Take the goddamned light and let me have some peace of mind! he cursed.

‘You say what?’ called his wife, who had excellent hearing.
‘I’m praying,’ he lied.
‘Praise God, o.’ she replied.

“Yeye” light, he corrected himself, not “goddamned” light. He had to quit the swearing habit. It was Sidi’s fault. His best friend had come back after twenty years in America with nothing but a portmaneau of swear words. At first he claimed his stuff was coming by sea, but his ‘three containers’ were a silly lie. Nine months had passed and he no longer mentioned the red Cherokee jeep or the American-spec fridge-freezer ‘on the high seas’. All he had to show for two decades in Boston were the unrelenting stream of bullshits and goddamns. Kentua had scolded him at first, but now and again he caught himself swearing as well.

I have to stop this goddamned swearing, he swore.

‘You say what?’ asked his wife.
‘Watch your bloody TV!’ he snapped,
‘KT!’ she scolded indulgently, reserving the inevitable half-hour sermon till her soap was done.

His phone started to ring. He ignored it. It was probably his brother with another hospital bill for their mother. Or perhaps his bus driver reporting a fake flat tyre. He used to have a lot more peace in the evenings when his phone was always dead from a flat battery. He retrieved his orange from the corner and peeled and ate it. He lay down. He was still hungry but there was no point saying anything about that, yet. His wife was not going to stir until the soaps were done. The last few nights she had not come to bed until after midnight. And the okra soup she had rustled up during a commercial break the day before was still constipating him. He cursed PHCN under his breath. He stripped to his boxers from habit – but with the fan working, it was not necessary, so he threw on a T-shirt again. He had ironed everything in the house, from handkerchiefs to his wife’s underwear. He had pumped water and filled every bucket and container. – just in case there was a power failure… but the power had refused to fail. The stress was beginning to get to him. He lay down for a shut-eye. He thought he should probably kill the light, but it seemed a pity not to use it… He closed his eyes, thinking he was too hungry and worried to sleep, but he dropped off just the same.

Suddenly he was roused by an elemental moan that seemed to emanate from the very bones of the house. It started from his wife, reverberating through the thin walls of his neighbourhood, and obtruded into his nightmare of the house sinking into marshy darkness. He sat up, wondering if his mother had just arrived by hearse, or the wreck of his bus in the back of a tipper… but when he opened his eyes, the darkness from the parlour in the house was only relieved by the holy glow of the green crucifix above the doorway. From the parlour, his wife shuffled around, blind, looking for candle. The week-long reprieve had dulled her power-failure instincts – she was not packing a torch in her holster. She found her own mobile phone and shuffled towards the kitchen in its blue light. His stomach lurched in anticipation. ‘They have taken their goddamned light!’ she said, gasping audibly as the swear word slipped inadvertently out of her.

‘Stop swearing!’ he grinned broadly. She had never done that before. The bloody thing was so goddamned infectious!

He sighed, stripped off his T-shirt, and stretched out in the darkness. The universe had righted itself. A familiar travesty was more like a family friend. ‘Praise God o,’ he murmurred, self-consciously adopting his wife’s Godspeak. Then, despite the new sweat drenching him, he fell into a dreamless sleep.

3 Replies to “The End of Failure”