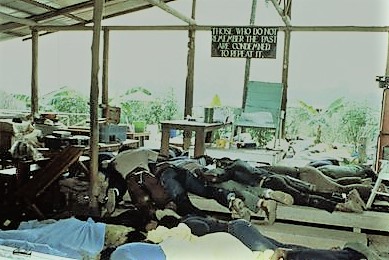 The Jonestown in Everytown

In 1978, my teenage mind was stunned by a massacre from which I am yet to recover. The facts were stark: Reverend Jim Jones had built a camp for his redeemed in the jungles of Guyana, 240 kilometres from the capital, Georgetown. He called it Jonestown. A thousand congregants followed him there from the USA, and he intensified the financial, emotional, physical and sexual abuse of his congregation that had begun in his network of churches from Indiana to California.

He took their passports. His armed guards patrolled the camp to prevent escape. Presently, news of the abuses of Jonestown filtered back to the US. On 17th November, 1978, a Californian congressman came on a fact-finding visit. A dozen defectors plucked up the courage to leave with him. As they boarded their flights in Port Kaituma the following day, Jones’ armed guards opened fire, killing Congressman Ryan and four others, injuring many more.

He summoned the entire population of Jonestown to the central pavilion where services usually took place. He ordered a mass ‘revolutionary suicide’. In the past he had rehearsed such an event during ‘White Night’ vigils in which his followers would drink pretend-poison. This time it was for real.

The young were murdered first. Parents syringed cyanide into the trusting mouths of their own children. Death followed five minutes of excruciating pain. We know this because a 44-minute recording of the last moments of Jonestown survives. Adults followed, drinking grape juice laced with cyanide. Those reluctant to follow through were forcibly injected with cyanide. Even their pet dogs and Mr. Muggs – Jonestown’s mascot chimpanzee – were poisoned.

Jim Jones, with a cowardice that was pathetic in the context, chose a less painful bullet in the head.  918 people died in total, including the 5 murdered at the airstrip, and the mother in Georgetown, who heard Jim Jones’ instructions on the radio, and – having no cyanide – led her three children, aged 10, 11 and 21, into the shower stall. With a kitchen knife. 909 dead bodies were recovered in Jonestown.

304 of the dead were children.

I was a 15-year-old teen myself when Jonestown happened. From my A-level classroom in Odogbolu, I followed the story in pre-internet weekly magazines. I saw pictures of dead children whose parents’ faith had crossed the line from gullibility into homicidal criminality. Four decades have passed, but the horrors of Jonestown, refracted through contemporary Joneses, has never left me: the horror of a people who went in search of God, found the Devil, and sat in his infernal pew. Of a people who looked for Salvation, found Damnation and sipped his suicidal brew. Of parents whose final sacrament of love was the sacrifice of their children’s lives.

Jim Jones’ son, Stephen, was sent away by his mother just before the massacre. He would later say, ‘It is also important to talk about the sickness of the people. Jim Jones by himself cannot kill 913 people. I believe that madness can happen to people under the right circumstances. If I don’t try to understand that, then those people would have died in vain.’

Behind Jim Jones’ usual chair at the central pavilion of Jonestown was nailed a signboard that read: ‘THOSE WHO FAIL TO LEARN FROM HISTORY ARE CONDEMNED TO REPEAT IT’. What follows now, in 10 bullets, is my own attempt to make sense of Jonestown’s collaborative madness of preacher and congregation, in order to better understand contemporary acts of congregational insanity everyday and everywhere, and the spectrum of abuse that goes with it.

2 Replies to “The Jonestown in Everytown”