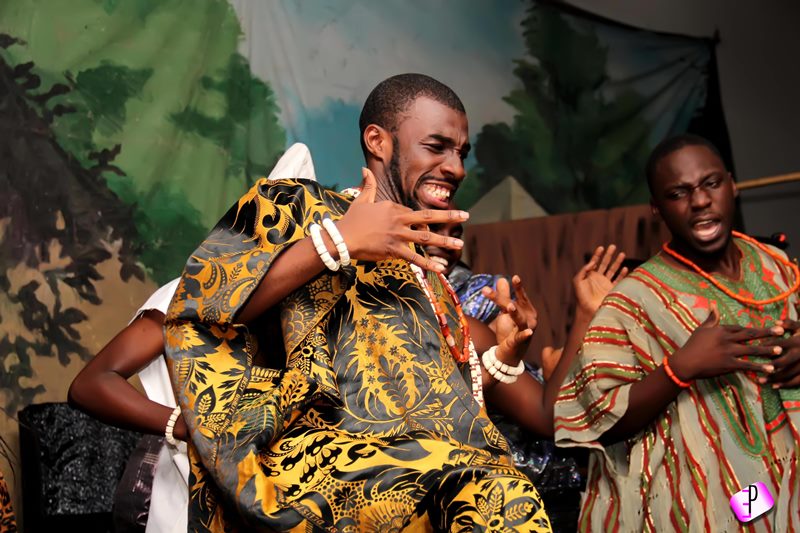 The King Has Never Done It

Back in March 2013, I stumbled upon a play put on by the G22 Production Company at Terra Kulture, on Victoria Island, Lagos. I had other plans for that evening but a chance encounter with Chuka Agili, the producer/co-director, rescheduled my evening. I did not regret it. The only amateurish thing about the play was probably its title: The King Has Never Done It. But as the performance wore on it struck me that despite the fact that all the performers were ‘amateurs’ whose day jobs chained them to some corporate desk or the other, their performance was good enough for me to buy a season’s ticket.

The play is set in the Aromire Kingdom and revolves around the court of a king in love with his own pleasures. He was wanting a heir and slave girl Olamma (Fedora Anunobi) was on hand to taunt his two wives with the possibility of one. The play was fully deserving of the description ‘comedy’, with the king’s perpetually-drunk half-brother, Adewale (played by Mosunmade Omofolarin) delivering a stand-out performance. – The part of a drunk is the easiest to parody on the dramatic stage, and the hardest to get right. – There is indeed an art to falling about!

Great way to pass an evening. Pity the high-flying staff of the next bank you do business in: many an excellent thespian might be languishing inside those stiff suits.