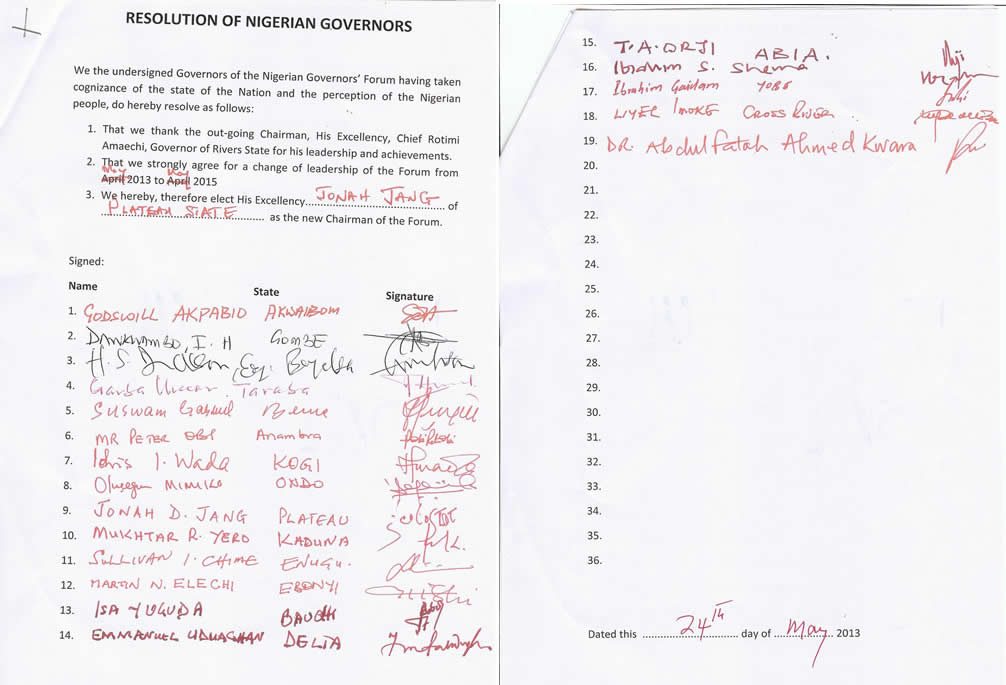 The Orjian Definition of Nigerian Democracy

The Nigeria Governors Forum (NGF) may have only 36 members but it has two feuding Chairmen. Last month, Gov. Amechi was elected by a 19-16 vote margin (‘guerrilla’ video on the secret ballot here). The loser, Gov. Jang, also announced himself chairman on the basis of signatures earlier obtained from 19 governors – all but one of whom took part in the election.

Since then the politicking by state chief executives has claimed much energy and resources – from court cases and duplicated websites, to a succession of factional meetings as our most important administrators crisscross Nigeria in support of their preferred chairman.

None of this is necessarily new. What is interesting is this definition of Nigerian Democracy by the Governor of Abia state, Chief Theodore Orji, who supports the Jang chairmanship. In this  Youtube Video, he responds to a journalist’s question (at 1.31):

Q: What does that do for nigerian democracy? this consensus issue that puts everything the governors do in doubt?

Of course, when Gov. Orji says ‘every person’ what he really means is 19 out of 36 governors. Presumeably, the 17 governor who were not consulted will be upset without ‘rancour’. Elsewhere, Gov. Orji was asked why the PDP governors broke up the forum – both feuding ‘chairmen’ are from the ruling party – and he had this to say:

… Since the NGF started, there has never been an election in choosing who will be the chairman. To come now and insert an obnoxious procedure is what the people are agitating against…

Of course the surreptitious video of the election showed 35 governors happily watching as their votes were tallied. The anti-election agitations of Gov. Orji’s group apparently kicked in after their candidate lost. All the same, these responses flesh out the Orjian vision of Nigerian Democracy, which betrays more than a passing whiff of the Post-Autocratic Stress Syndrome where ‘selection’ trumps ‘elections’, where elections are obnoxious, and where the ordinary decision of the majority is swamped by horse-traded deals which are given concrete reality by the battering ram of public resources bent to private use by public servants in office.

Unfortunately, the Orjian variation of Democracy opens the door of the Deal Room to influences that are less than democratic. ‘Consensus’ has a chummy, friendly ring to it, until Blackmail, Ghana Mus’ Go bags, The Big Stick, and the bugbear of Peer Pressure also enters the room. The narrow stall of  Democracy by secret ballot on the other hand has space only for man and Conscience. It excludes the beady eyes of the secret cult.  Nigerians can hardly take lessons on Democracy from 36 governors who cannot govern their own confab, and certainly not from governors who find elections obnoxious.

‘Consensus-building’ is a useful part of any democratic process but taken to an extreme it will bleed the electorate of real choice and make peaceful change impossible, thereby making violence and anarchy inevitable. So called consensus candidates usually emerge from cliques that disenfranchise electorates. The document signed by 19 governors for instance denied the balance of 17 governors a say. Even if the majority has its way, this is the entitlement of the minority.