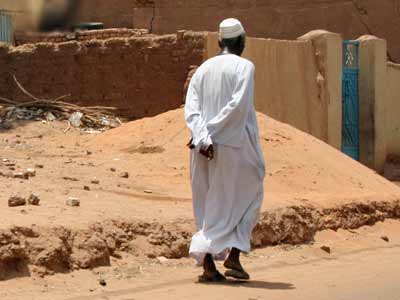 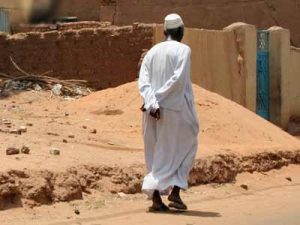 ‘I think there’s someone at the gate,’ she snapped irritably.

From her chair at the bottom of the garden, Effia wondered how she could hear the gate rattle, when a man on a rug by the gatehouse didn’t. His hearing had not been quite so bad before his pilgrimage to Mecca the month before. She watched as her sulky guard of five years walked the dozen stiff-legged paces to open the gate for Alhaji Isa, a well-to-do trader in the neighborhood. He had come at her request, but he also knew Ahmed well enough and they held an extended greeting session.

Ahmed’s relationship with his employer had degenerated since his return from Mecca. Effia could not understand it. He had been a cheerful, enthusiastic guard, a model employee really, with lots of initiative. Beyond his gatehouse he volunteered with the gardening and with chores of every description around the house. At the office party three months earlier when Banwi, the sales director, was boasting about a new ACoS (Automatic Change-over Switch) that started her generator within 60 seconds of a power failure, Effia had mentioned her own MCoA (Mallam Change-over Apparatus) which achieved comparable times – in between grilling a Lagosian version of a mean braii.

All that was history of course. Now Ahmed did only what he was told, and that with palpable reluctance. Now he had to be called thrice, at least, before he responded. But the worst – as far as Effia was concerned – was his newly dour disposition. Before his pilgrimage Ahmed had been a cheerful wag. Now he only laughed on the rare occasions when his friends visited and they sat cross-legged on the floral rug he brought back from Mecca. She realized that she would have to fire him soon: a security man with a secret grudge was a bad risk. It filled her with regret, for she was fond of her guard.  But she couldn’t tolerate this new stubbornness. It was driving her mad.

The rotund trader sat cautiously on the fragile-looking chair. He looked hungrily around the pagoda, borrowing new ideas for the outfitting of his own garden. ‘Ahmed said I should thank you for him,’ he began.

‘For sponsoring his pilgrimage to Mecca. It was very kind of you…’

‘Hmm! If he’s grateful, he’s showing it very strangely. To tell the truth, I’m looking for a new guard.’

Alhaji Isa’s brows rose. ‘Why? I thought he was doing well.’

So Effia told him all about the obstinate Ahmed that returned from Mecca.

When she was done, Alhaji Isa groomed his beard in embarrassment, for he had overheard her calling Ahmed to open the gate. He knew there was no discreet way to say it: for two years she had failed to pick up the hints he had been dropping in his own behalf. So he leaned forward with a whisper. Effia stared at him in open-mouthed disbelief. Then she remembered her first lesson in the psychology of address, at a cocktail party in a private club in Victoria Island, during her first week in Lagos, ‘Why are they calling me Madam?’ she had whispered to her friend, Banwi, ‘Is this a brothel? Do they think I run it?’

She looked speculatively at the cross-legged guard who was bent over a muttering transistor. With a radio for excuse it would normally take four or five shouts to get his attention. Effia took a deep breath and called across, in a conversational voice, ‘Alhaji Ahmed.’

The guard’s head snapped up, his face, numb with surprise: ‘Yes Mada-‘  he began to rise, then he realized that he was probably being twitted, and sat back down, tucking his jalabiya under his legs. His poker-face cracked and he bent quickly over his radio, the caught-out kid trying to hide the telltale grin. Effia tried to suppress her own grin, and failed.

Her old friend was finally back from Mecca.

12 Replies to “The Pilgrim's Address”