The Rumble in London (I)

We do live in interesting times.

Yesterday I journeyed to London. The occasion was a protest rally at Parliament Square and a march to the Nigerian Embassy at Northumberland Avenue. The immediate provocations for the protest were a missing president, a constitutional crisis and a slow-burning rage (50 years old this year) at a desperate poverty of leadership in Nigeria. There was also the embarrassing mismatch between our national ambitions and our realities.

It was not a London-only affair; there were other cross-country protesters as well, travelling from places like Oxford, Exeter and Bath. It was certainly the largest turnout that a Nigerian protest had mustered in recent times. In the course of the cold winter’s day the protesting voices grew hoarse and toes froze in boots as a band of three to four hundred Nigerians (supplemented briefly by a drunk Englishman in green hat and fur coat) spent five hours on a campaign bolstered with the inveterate Nigerian spirit. 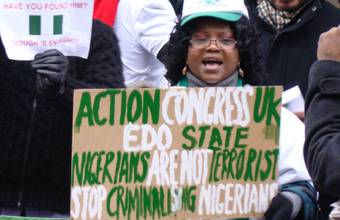 We did not exactly grind London to a halt, but it was an impressive improvement on the forty or so hard-core protesters that reportedly picketed President Obasanjo not too long ago. There was definitely something in the air yesterday. A sense of new beginnings that perhaps sprung from the fact that so many in that picket were virgins at this: a new wave of disillusionment had broken us from the traditional Nigerian complacency in the face of anomie.

The other was the organisational sense of comradeship that harked back to the Babangida/Abacha dictatorship. Apart from the official sponsors of the event, many other groups turned out. One of them, the Nigerian Youths Initiative, was represented by a brace of three young men who seemed to have been requisitioned from that section of a rugby team. The whole event seemed less a protest than a Movement – and the one thing everyone was asking, was What Next.

Mid-protest, an attempt was made to fetch the Ambassador to address the protesters (more likely to get a dressing down). Wisely, the hoary-haired Ambassador Tafida remained scarce, dispatching a plucky lieutenant to take the flak. It was an unnecessary diversion though. The ambassador’s opinion on the whereabouts and condition of his Commander-in-Chief (to take just one issue on the protest agenda) was in all likelihood as good as ours. 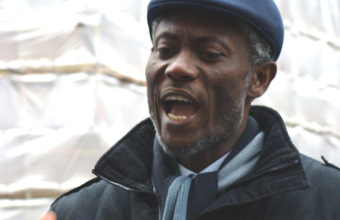 Speakers took the soapbox – improvised from a telecoms box on the pavement. (we may yet get a bill from Virgin Telecoms for this liberty). Kayode Ogundamisi, Abdul Mahmud, and many other vets of previous struggles spoke.  ‘We must get our country back, enough is enough,’ I raged, till my own voice was cracking, but all the press was going to report was my intro, We have been recolonised by a single tribe, not Hausa, Yoruba, or Igbo, but a tribe of thieves. This was pretty ironic, really, because it is probably my first use of the word ‘tribe’ to describe an African ethnic nation in the last decade or so. It was writerly conceit, that is what it was: the inability to resist the interplay of tribe and thief. Mea culpa. 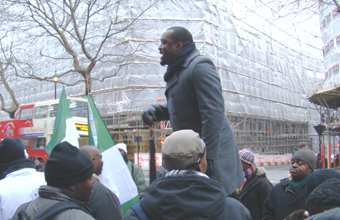 Most heart-warming was the articulate fury of the young Nigerians, male and female, in that gathering. They are too young to have been seared by the civil war that an earlier generation of clueless leaders have dragged Nigeria through. But the disgrace of their inheritance was fuel enough to set them on that narrow soapbox (Health and Safety officials would have had a fit had they seen that perilous ledge next to manic, speeding London truckers, but most of us were graduates of the molue school of balance and were in no danger really). One after the other they stood there, these are mostly the true children of Nigeria, having been born well within the 50 years of ‘independent’ nationhood. 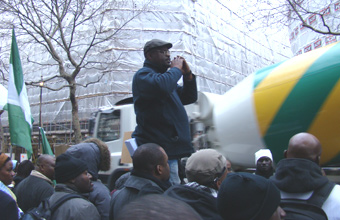 Yet, why were they venting their gripes here? London was not exactly the Nigerian capital, despite the evidence of the streets of Peckham. Why was a Leadership protest holding thousands of miles from Abuja – or Riyadh? You could hear the answer in the raging voices. Many were dispossessed of their country, involuntarily expelled from the warmth of their homeland by termite leaders who riddled the yams they were supposed to nurture with their kleptomaniacal tunnelling. Enough is enough! they cried, and even for that catharsis alone, one sensed, the public protest was worth it. 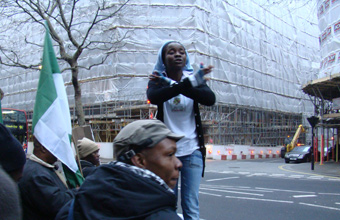 As their countrymen melted into the non-Nigerian Africanness of the besieged professional – or cleaner – in London, these ones had stood up publicly to identify with, to stand up for their troubled nation. And they were not just striking out for nation, they were striking out for themselves. For their spiritual health.

As evening approached, it was clear that nobody wanted things to end in front of that scaffolded embassy in uptown London. Some wanted a series of marches throughout the year. What was clear was that this protest – with the Abuja protest and the others underway elsewhere in the world, was nothing more than a marker: the public outing of a building rage.

What Next?
The message to all protesters, and to all Nigerians who read this is: get off the stool of apathy. There is a train crash ahead. This is another chance to prevent anarchy or worse in Nigeria by boldly and intelligently reshaping our country. Stop grumbling and complaining in your living rooms, in your danfos. Join something. Start something. In your neighbourhoods, in your working places, in your schools, begin to associate, unionise, to group together. We are all followers at some point. You may be an MD in trendy Lagos.  When you arrive in your village, as you bump down the untarred roads not tarred by a termite councillor, you are a follower. 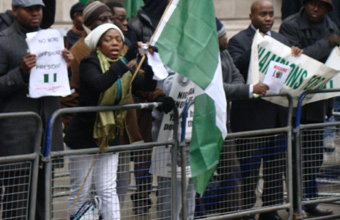 Do something that boldly confronts the status quo. In small steps, in big ways, refuse to conform to the old and wrong status quo. The London protesters were only asked to lose a day’s pay and stand in freezer-temperatures, to stand for something. They were not asked to die for Nigeria. They certainly were not asked to blow themselves up in a Boeing… or to confront the equivalent of Abacha’s assassins. (Sometimes it is harder to live for your country than to die for her.) Begin your own investment in your future with small coins as well. Begin to believe again. Reject cynicism, and its sneering, self-fulfilling prophecy of the inevitability of failure. Set very modest goals, achieve it, and move to bigger things. This is not a work that anyone will achieve alone, this remaking of Nigeria. In Kiev, two plucky Nigerians reputedly carried out a protest at the Nigerian Embassy. They were inspired by the Abuja protests and the protests planned elsewhere in the world. They determined that Kiev would not be left out. One man can provoke two. Two can make history. Start now. Never give in.

By 1st October, 2010, Nigeria will be a different country.

This is also a message to all Africans. Nigeria may have exported a lot of things to other African countries, not least of all king-sized corruption. We may have brought the beast of major civil war to West Africa (which took decades to arrive in Abidjan and Freetown, although arrive it did, and with a vengeance). However sanguine the situation elsewhere may seem, there is something structurally broken, unfixable, about a Leadership that is not accountable, and subordinate, to its Followership. We have to fix this problem all across Africa. We can no longer afford to have crises incubating in one country and pretend it does not concern us. If a civil war breaks out in Nigeria, our neighbours will be impacted by the consequence, and vice versa. A village of 500 people is changed forever by 1000 refugees, and that is the story of African crises to date. No disaster can overtake a country without scorching her neighbours. Across Africa, let us provoke ourselves onto this season of change.

No Really, In Practical Terms, What Next?
What next is a civic campaign that has the potential to transform Nigeria. It is simple – as well as exciting – and it is the subject of my next post. I hate to sound like a cheap Nollywood episode, but please do visit by 18th January. You see, immediately after we finished the rude displays on the streets, there was a more polite affair in the basement of the Nigerian Embassy which I casually gate-crashed. The Ambassador was hosting Prof Maurice Iwu, the head of the Nigerian Electoral Commission. Ahead of our absentee president, he is probably the most maligned Nigerian alive, and in addition to his many electoral sins, he is reputed to be responsible for the leaking of many Nigerian roofs…

Confused? Watch out for The Rumble in London II.