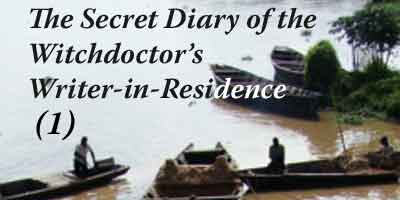 The Secret Diary of the Witchdoctor's Writer-in-Residence (1)

‘I have one last condition,’ said De Sampa on that third day of our long-drawn negotiations. His earlier ‘conditions’, including the handsome black goat, were nowhere in sight and I wondered whether he could still refund them if this last request was too much for me to pay.

‘You must not reveal any of my secret spells or potions,’ he said.

De Sampa was a wiry, middle-aged man with a penchant for damask print shirts. He was bald and wore a neat goatee. There was not a speck of paint on him – nor did he have any of those eccentricities for which his profession was notorious. For a witchdoctor, he seemed particularly harmless. If there was anything odd about him, it was his unsettling stare, but I had been staring at him for three days and I was no longer unsettled. ‘What if I find out that it is all bullshit?’

‘Let’s just suppose that after the four weeks, I decide that it is? That there are no real potions. No magic mantras… that it’s all a mind game?’

He pulled out a tiny beaded amulet from his pocket and shook it in a cupped palm, like a ludo player contemplating a critical throw of the dice. ‘You can’t write about that either,’ he said eventually. ‘That’s my final condition.’

So what was the whole point of being a witchdoctor’s writer-in-residence, I wondered, if one couldn’t even show up his scams! Yet the smell of fried goat meat still hung heavily in the air. And on my fingers. I knew the provenance of the hospitable plate of meat I had just eaten. The ‘conditions’ I had already satisfied were non-refundable and this was no time to get finicky over the small print: I was talking to the only witchdoctor left in the whole of Waterside and if I wanted to write the expose of my dreams I had to deal on his terms.

So we shook hands on the deal.

Then he brought out his choka, which gleamed dully from dried cockerel blood, and insisted that I swear an oath on it as well. I wasn’t too keen on that one… but it was just a lump of old wood… and I couldn’t very well endanger my literary project over an empty oath on a broken branch, so I swore away. But De Samba got carried away: ten minutes later we were still at it.

‘May you be as impotent as a wet rag if you betray my secrets,’

‘May you grow bow-legs if you give my potions to my rivals,’

On and on he went, until I wished I had switched on my tape-recorder to capture the exciting poetry of his curses.

Yet, as I returned to Alma Guest House that evening I could not deny the  tiny lump of fear in the pit of my stomach. (This is just the honest fact.) I don’t know if it was the poetry of the curses or his dirty talisman interacting with my real intentions – what was undeniable was the uneasiness in my stomach. Then I got into my room and I chewed an antacid, and the stomach settled. Probably the blasted goat meat.

Yet, I could not afford to let any superstition take root so early in the project, so I did the logical thing: I pulled out a notebook and started this secret diary. I was looking forward to the first day of my residency.