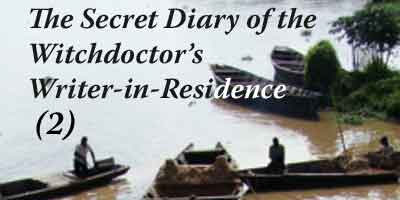 The Secret Diary of the Witchdoctor's Writer-in-Residence (2)

When I arrived for my first full day, De Sampa was waiting for me. He put a necklace in my hands. ‘Wear this,’ he said, shortly.

‘Just wear it,’ he said, turning away. ‘It’s for your own protection.’

‘Look, I’m not your apprentice, I am just an observer here, I’m not having this…’

‘It up to you,’ he said ominously, ‘but don’t say I didn’t warn you.’ He sat down at a dining table spread with vats and jars of dried leaves that did not look in the least edible. ‘Spirits can be unpredictable,’ he continued. ‘My first boy started stammering after the first week of his apprenticeship. Just like that. Took me months and months to cure that one…’

I studied the necklace: it was a single pendant suspended on a black cord. ‘Interesting,’ I murmured (referring purely to the poetic potentials of the jadelike stone). I certainly wasn’t going to wear it, but perhaps I might write a poem later about it. I put it in my pocket, not liking the smirk on De Sampa’s face as he drew up a small mortar.

He was grinding and mixing all morning and all afternoon. I waited for the patients but nobody came. Hour after hour, we kept up that vigil but the only thing that stirred his front door curtains was a breeze that couldn’t quite shift the camphorized aroma of his herbarium. I tried to be patient but as I entered the seventh barren hour of my residency, as I finished another walk through rooms stacked from floor to ceiling with meticulously labeled cellophane bags and jam jars of ground powders and loose barks bound in twine, I remembered that during the three days in which I wooed him I had not encountered a single patient here either, and I grew really anxious. Was his practice dead? Perhaps I had unwittingly become writer-in-residence at a museum. Perhaps Watersiders had become like me, wise to the wiles of the conman.

Finally, I flopped into a chair in his ‘consulting room’. He was still grinding away as if he had a long line of patients waiting for his prescriptions. I worked the plunger of my pen absently over a blank notebook. ‘Say whatever is in your mind,’ he grumbled eventually. ‘I am a nativedoctor, not a mind-reader.’

‘What happened to all your customers?’

‘They will soon come. The supreme court is never as busy as the magistrate court.’

‘What has the supreme court got to do with this?

‘I am the final court of appeal on matter of life and death. People only come here when the hospitals and doctors have failed them.’

‘So what happens if everybody is happy with their magistrate courts for the next one year? Will you finally close down?’ He answered me with another of his mild smiles. As though he was too polite to call me a fool to my face. ‘I guess your famous witchdoctor-grandfather was much busier?’ I said, trying another tack.

‘Did he have slow days as well?’

‘No,’ he hesitated, ‘but that does not mean he was better than me: he used to cook abada stones.’

Once again, he tried to unsettle me with a significant stare, but I just stared back at him. Eventually he rose and led me into an overgrown garden dominated by a guava tree. Near the slab that covered the soakaway pit, was an old grate with three soot-stained stones. They looked like primitive cooking stones that had once balanced a cooking pot. Sure enough, lying around were charred stumps of leftover firewood. ‘Granpa’s abada stones,’ he announced quietly. ‘If he had a slow week he would light a fire here. The spirits that live in these stones are driven out by fire. And they always brought him business.’

My smirk grew uncontrollable. I was going to have fun here, after all. ‘So why don’t you light a fire? You haven’t had a customer for at least… five days?’

He looked at me sternly. ‘A healer is like a grave-digger: he can pray for blessings, but he must never pray for business.’ He hurried back to his grind stones before I could interrogate him further on the distinctions between the blessings and the business of a witchdoctor. I wandered through a garden that grew a profusion of potted herbs whose names I had not a clue about. Out of boredom I stole a guava. Then I got a pack of matches from his kitchen and, with some dried leaves, kindled the firewood in the grate. I watched the fire for a few minutes till it burned smokelessly, then I kicked the old stones closer to the flames. There were no out-worldly shrieks of genies escaping their ghostly hermitage and presently I got bored all over again. I stole another guava, and as I strolled out into the front garden I saw the witchdoctor’s first visitor of the day approaching.

It was almost 5pm when he arrived, pushing an old bicycle on whose handlebars was strapped a leafy shrub. In addition, he seemed to be carrying, not just an oversized gourd of palmwine on the rear shelf of his bicycle, but a grudge against the world. As he rolled over the rough road, precious liquid contents sloshed to the dust through the sponge in the neck of the gourd. He cursed colourfully at each waste and I watched him prop his bike carefuly against the gate.

‘What are you looking at?’ he snapped. ‘Who are you? Where’s De Sampa?’

‘He’s inside,’ I said. Then I asked the burning question, for I was still shaken by the immediacy of the abada’s intervention, ‘Are you a patient?’

He looked at me derisively, ‘Am I mad? If I’m sick I go to a real hospital. Where’s De Sampa, I’m here on business!’

With some relief I went to get De Sampa while he unstrapped the bundled shrub from the handlebars. Despite his visitor’s prickliness, the witchdoctor greeted him warmly and at African length, then he turned his attentions to the shrub. He studied the leaves carefully, crushing one and smelling his fingers speculatively. Then he sighed and hurled everything onto the overflowing rubbish by his gate. The wine tapper was angry and crestfallen. ‘Are you blind? You’re telling me that is not mkpire?’

‘It is not. That’s is a useless horseweed. I don’t blame you though, only an expert can tell them apart. Always crush and smell the leaves. Mkpire is minty. And the flowers are…’

‘I can give you special price…’

He hesitated, and the tapster pressed a tasting cup on him. He drank half in a gulp and seemed to choke, dashing the rest of the wine on the ground. His face seemed contorted by bile. The tapster cursed and snatched his cup away. We watched him wheel his bicycle around and roll away. His incontinent gourd was spilling right away and his stream of colourful curses started up again. I realised I was swallowing and turned away. De Sampa watched him disappear from sight. He was licking his lips, and we both stared wistfully at the blotches of voluntarily and involuntarily spilled wine on the dust road. They would have been the perfect accompaniment to our luncheon of fried goat meat. I waited for him to say something profound, so that I could have something to write in exchange for the last eight hours of my wasted day but he only said ‘See you tomorrow’.

We shook hands on it.

‘I hope you found your first day very useful,’ he said.

‘Well, not really,’ I replied, seeing no reason to sugarcoat my disappointment.

‘At least you have learnt that it is not good to call the patients of a native-doctor “mad”,’ he lifted the shrub carefully from the refuse tip, ‘This is mkpire. It is very rare because it is so difficult to seed, but quite useful in managing epilepsy.’ He nodded like a lecturer dismissing a class and carried his prize into his empty house.