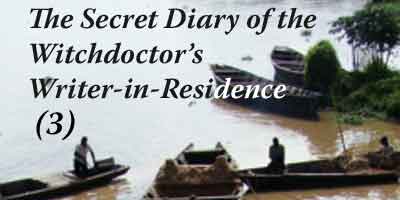 The Secret Diary of the Witchdoctor's Writer-in-Residence (3)

When I arrived at his compound the next morning, a driver was trying to extricate the horns of a goat from the boot of a Cressida. I pushed opened the main door and De Sampa was there once again, this time with a harried look in his eyes, ‘Come quickly,’ he said, handing me a smock, ‘I need your help.’

I wasn’t falling for it this time. ‘I’ve told you before, I’m an obser-‘

‘Don’t give me that!’ he snapped severely. He was wearing a green smock himself, but it was when I noticed that his hands were bloodstained that my throat began to constrict. ‘I saw what you did in the backyard yesterday! This is all your fault!’

‘What are you talking about?’

We both heard the scream. He threw the smock at me and dashed away. I contemplated my sudden migraine, and was about to take the rest of the day off when a middle-aged woman burst through the door that had just swallowed De Sampa. She was fearsomely built, and was snapping the fingers of both hands in a hard, percussive tatoo, ‘Are you not the apprentice we have been waiting for? Come now! My daughter is dying!’

I followed the strange woman mutely through the door that led into the courtyard, which De Sampa called his ‘healing circle’. There, on  a stretcher on the floor, a buxom woman in her twenties threshed the floor in agony. Her right leg was bent at an impossible angle. I froze. I was never very good around blood. I looked away as my stomach began to churn. On a table at the far wall, De Sampo was feverishly mixing herbs and powders into a white pail. Near the door, an older man faced the wall and wept – all the while whacking himself grievously on the back of the head. The goat was now bleating from the backyard proper.

‘What’s this?’ I said hoarsely, to nobody in particular, ‘What’s happening?’

‘Manbaby!‘ sneered the middle-aged woman. She pushed me towards her daughter, who sat up suddenly, uttering a string of four-letter obscenities that stiffened the motherly fingers in the small of my back. Then the younger woman swerved into a series of staccato-prayers that ended in the name of Jezuz! She slapped the ground so hard I winced. It seemed a family of slappers.

I leaned into the mother’s ear and whispered urgently, ‘Why not a hospital?‘

From across the courtyard, De Sampa turned a poisonous glance towards me, and I realised that even if he had no supernatural powers, his hearing was acute enough. ‘Because the real hospital wanted to cut off her leg! Not so?’

The mother nodded vigorously as De Sampa carried his pail across to his patient. He was shouting at me, ‘Come BC! Come and sit here!’

I approached the injured woman, but there were no chairs in sight. She was half-naked with her skirt riding up to her waist, but nobody – least of all the woman herself – seemed in the least bothered. Beside her, De Sampa dipped a cup in his pail and held the mixture to her mouth. She gulped greedily, gagged, and turned away but De Sampa forced the cup down her. He took the ladle. ‘Open up!’ he snapped, his bedside manners evaporating under pressure. She did, and he pushed the wooden ladle between her teeth. As she clamped down on it, he warned, ‘Don’t spit it out, you hear? If you bite off your tongue I can’t help you, I am a bone-setter, not a tongue-sewer.’ She glared at him and I saw that she was his equal in that department. Even in her situation, with lipstick all over her forehead and eye-shadow on her chin, it was clear that she was nobody’s pushover. Then he straightened up and turned to me.

‘Good,’ he said, pulling and pushing until I was standing astride the broken limb, with my back to the woman. ‘Sit,’ he said again.

‘Haven’t you ever sat on a naked woman before?’ he shouted angrily, ‘Sit down for heaven’s sake!’

I squatted until I was resting gingerly on her thigh, keeping most of my weight on the balls of my feet. When I applied to be a witchdoctor’s writer-in-residence I had no idea that by the second day I would be sitting on a half-naked woman whose name I didn’t even know, in the approving presence of her parents – with said witchdoctor swearing in the name of heaven. He swore again, ‘For God’s sake BC, sit! And hold her well well!’

It seemed counter-intuitive to actually sit on a broken leg as part of the treatment – but I swallowed my reservations and obeyed silently, trying to keep my breakfast down by looking at De Sampa’s glistening scalp, rather than what his hands were doing.

She moaned. She gripped and tugged at my shirt, in anticipation of the imminent pain. ‘Are you ready?’ De Sampa demanded.

Mother of Novenas! Said the middle-aged man, giving himself an extra hard slap.

‘Somebody tell him to shut up,’ said the middle-aged woman.

‘Somebody tell her to mind her own business,’ said the middle-aged man.

De Sampa yanked hard and the broken leg shifted violently, mimicking my stomach. There should have been an audible crack as it popped back in place, but I didn’t hear it – possibly due to the scream from the woman behind me – which I didn’t hear either, since the slap that threw me onto my left side also deafened my right ear. Yet, when I turned angrily on the young slapper she was lying lifeless on her back, the ladle slipping out from between her teeth. ‘She’s dead,’ I cried.

The parents began to scream but De Sampa ignored them, pulling, twisting and palpating the lower limb until he was satisfied. Then he began to bind the broken leg into splints with an interminable length of bandage. By the time he was done, the quarrelling husband and wife were kneeling over their daughter, finally united in an ear-piercing grief. He poured the rest of the pail carelessly over his patient and she sat up, spluttering at her bedraggled parents. She pulled her skirt down indignantly. ‘It’s not so easy to die,’ chuckled De Sampa into the sudden silence of relieved parents. I could tell he was pleased with the outcome of his routine. I rose and walked towards the backyard, hating how I was unable to walk in a straight line.

Hours later, the parents had left for the second time and I was sitting with De Sampa in the shade of the guava tree as he gloated over the X-ray that had ‘turned the mind of the General Hospital doctor to water’.  I didn’t want to point out that it was far too early to say who was right or wrong about the amputation, or that it would be months before we would know if she could ever walk again anyway. What I really wanted to ask was the nature of the narcotic that had kept Rayo pain-free and happy for the last few hours. Instead I asked him about the accident and he described how a commuter bus had slipped over the guardrail on the Waterside pontoon. Three other passengers had been hospitalised at the General Hospital. He glanced around surreptitiously, ‘You are very lucky, nobody died.’

‘What does it have to do with me?’

‘The first – and last – time I cooked abada stones,’ he whispered, ‘an air force plane crashed. Forty soldiers died. Forty. My conscience…’ he shrugged and mollified said conscience with a sip of palm wine.

I did not want to listen to more of his hocus pocus but it was still twenty minutes to five, so I went in to have a look at his patient. Rayo was now sitting up in a raffia chair. Her calf was three times the normal size and her kneejoint seemed larger than a buttock. ‘You are not yet tired of looking at my body?’ she mocked.

When I recovered my voice I coughed, ‘I just came to–‘

‘I know, I know, mister apprentice. Oya, check my leg. Has it healed since your last inspection? Can I walk home now?’

‘I am not an apprentice, I am a writer-in-residence here. How are you feeling now?’

‘Hungry. Very hungry. Can you bring me more of that boiled corn that my mother brought – before you and your master finish eating everything.’

I was scandalised. In point of fact, her mother brought a separate basket for De Sampa, but I decided not to get defensive. She was probably not as acerbic in real life. It was probably all the powders that De Sampa had been feeding her. ‘I told you, he’s not my master, I am a writer-in-residence.’

‘So because you are a writer-apprentice you can’t serve maize to a woman with a broken leg, is that it?’

I considered that. ‘How many cobs do you want?’

She smiled sweetly, ‘One is enough. But please microwave it for two minutes. I don’t like cold maize.’

‘You are in a witchdoctor’s yard,’ I told her loftily, ‘not a hospital. there’s no microwave oven here.’

I went to get her cold corn, having rescued a little dignity for myself, but as I passed De Sampa, he muttered testily, ‘You better stop chasing my patients. – And I’ve told you a hundred times, I am a native-doctor, not a witchdoctor.’