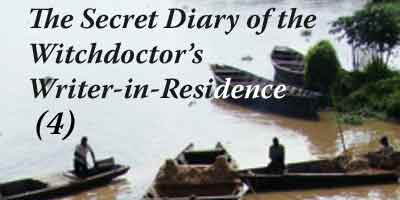 The Secret Diary of the Witchdoctor's Writer-in-Residence (4)

‘Have you treated this type of broken leg before?’

‘Of course. Plenty, for that matter.’

‘How long does it normally take to heal?’

We fell silent. We would not have admitted it in so many words, but De Sampa and I were spending more time than usual in his garden, to get away from Rayo’s ready tongue. Even now we had to raise our voices to be heard above her apala music, which resounded from the DVD-player that her harassed father had delivered only that morning. Ten minutes earlier De Sampa had retreated shame-facedly from a futile attempt to moderate the volume. Now, his eyes narrowed against the smoke from the blazing coal as he fanned his brazier vigorously. Eventually the kindling burnt out and the coal bed glared like a rash of red wounds. Carefully, he arranged the severed head of his latest goat on the grill, amidst some thin-cut steaks from a bushel. The dead goat glared at us balefully as blood from its meat dripped onto the hissing coal.

‘Why didn’t you give the head to Saliu?’ I asked, uneasily. It was apparently beneath the prestige of a witchdoctor to butcher animals and every other day his neighbour, Saliu, stopped by to help out. He was paid in meat and seemed very happy with the offal that De Sampa had dumped into his bucket.

‘What’s the matter with you?’ he replied, ‘This is the best part of the goat!’

He sat back and we sipped his wine and watched his goat watching us. It was past noon but that morning had been busy – in witchdoctor terms. The first visitor was no client, though: she was a jilted wife come to quarrel with De Sampa for preparing a potion for her husband’s lover. De Sampa had offered her a potion to win said husband back but she had flounced out, pleading the blood of Jesus, declaring that all his black magic was useless. An hour afterwards, a trader whose business at the night market was falling off had come for a little ‘something’ to woo her customers back. She had taken his vial and listened avidly to his instructions, although I couldn’t help thinking that he needed his own medicine more desperately than the customer.

He turned the goat’s head on its ear and peppered the steaks. As the not-disagreeable smell of singed hair assailed our nostrils, a spray of brain juice spluttered on the coal bed. My mouth filled with saliva. ‘This your writer-work,’ he said, out of the blues, ‘does it feed you? Is there money in it?’

I hesitated. Usually I would puff my circumstances, but De Sampa served good lunches and I didn’t want him to get the idea that I could pay for them. I decided that honesty was the best policy for once. ‘Not exactly,’ I conceded.

He stoked the fire, ‘You’re a nice boy. If you were not too proud to answer “apprentice”, I would have taught you my business.’

I had not been prepared for the pity of a witchdoctor. I laughed with some surprise, ‘I don’t want to be a witchdoctor!’

‘Or a native doctor either,’ I said.

‘It’s not a matter of pride,’ I protested, ‘Afterall, it’s not as if your business is all that bouyant, is it? One whole week and only two patients!’

‘Two. The woman didn’t agree to hire you.’

‘She’ll be back, let’s bet. I have treated many nicodemuses like her. If you and Rayo were not there she would have agreed. Why do you think she came in the first place?’

‘And that’s only one week. I’ve been doing this job for thirty-five years now.’

I looked around meaningfully. It was a large compound, to be fair, but it couldn’t have cost that much three decades ago. And thirty-five years was long enough for him to have painted the external walls if his business was doing that well.

‘In this business you can have power or money but never both. During my initiation I chose power. That’s why my customers come from all over: last week, one family came from Malabo! But as for money… I will eat very well, but I will never raise a storey building. That’s what I agreed with my spirit.’

I nodded politely. I stared fixedly at the goat and he flared angrily. ‘I know what you’re thinking! You’re thinking, the ugly man says he hates women because he can’t find a girlfriend, not so?’

‘That’s not what I’m thinking,’ I lied. ‘But anyway, if your charms are really powerful you would have become rich. It is simple economics.’

‘Simple economics!’ he scoffed, ‘This is not economics. My work is spiritual. I don’t charge. My customers give me anything they like.’

‘That’s a charging strategy. People always give more than you could have charged. I saw the big bag that that trader gave you.’

‘Do you know what was inside?’

‘Even if it was ten ten naira notes, it was still a big bag!’

He hesitated. ‘They were pears.’

He rose and retreated into the garden shed and returned with a black cellophane bag. As he peeled it back, my visions of currency note bundles dissolved into a dozen overripe fruits. ‘She said business was very bad. If you want you can take them, I don’t eat pears.’

‘You can sell them,’ I suggested, sympathetically.

‘But your rich customers will compensate-‘

‘So why don’t you charge them?’

‘That is between me and my spirit,’ he said irritably, ‘Thirty-five years now. He gives me power and I don’t charge. Anything my customers bring, I take. The day I start charging, my powders will become dust.’

I scratched my head, remembering that the first goat I had brought had been rejected because he said he could count its ribs. I cleared my throat. ‘What about the goats…’

He became angry again, ‘This is not a game, BC. Anybody coming to see a native doctor knows that they have to come with a chicken, a goat or a cow – depending on the seriousness of the problem! Spirits have to drink blood!’ the goat’s left eye exploded and he broke off to turn the roasting head onto its good ear. He added, more quietly, ‘The meat is just by the way.’

From the house, Rayo turned down her DVD and shouted, ‘De Sampa and Sons, is the smell of goat meat part of your native doctor treatment? Or am I supposed to starve to death here? Did I tell you people that I am dieting?’

De Sampa looked at his watch and sighed. He shook his legs and waited until I raised my wine glass to my lips then he said, ‘Tell her to be patient, that her mother will soon bring her food.’

I dearly wanted to remind him that I was not his apprentice, and that confronting Rayo was way beyond anything in the conditions we had agreed… but I knew very well that there was no such thing as a free glass of wine, or roast goat meat for that matter. I sighed heavily and rose to my feet.