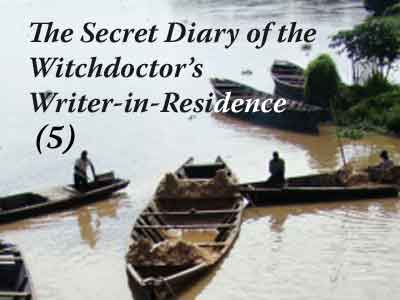 The Secret Diary of the Witchdoctor's Writer-in-Residence (5) 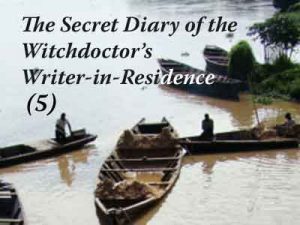 I began to go late to the witchdoctor’s because of Rayo, whose moods seemed foulest in the mornings. I started hanging around for breakfast at the Guest House. Alma was a little irritated that first morning I roused her to cook for me. Although her rooms were always full, her clientele seemed mostly interested in sex, and she did not look too happy to be woken up just to fry eggs for me. Still, she had advertised bed and breakfast and I held her to it. In retaliation she served me in her nightgown, and overfried the eggs, but I liked my eggs crispy so I smiled through my punishment.

By the time I was drinking the last of my tea she had changed into her street clothes and recovered some of her good humour. As she cleared the table, she plunked down a plate of some Ugba salad. I shook my head, ‘I didn’t order any…’

‘I know. It is just something special I did yesterday. Taste it, you will like it.’

I thought it was churlish to reject her clumsy apology, so I forced down the plate of slightly-off salad. When I finally rose to go, she presented me with a bill. ‘Breakfast is supposed to be free!’ I protested,

‘The breakfast was free,’ she agreed, pushing up an expanse of breast with a forearm, to scratch an itch underneath, ‘this is for my special salad.’

I was not happy to pay for her leftovers, but I still remembered her mockery when I hung around for my six naira change on the day I checked in. I paid up grudgingly.

It was almost 10am when I left for De Sampa’s, but it was also Mother’s Day, so I finally stopped at the cemetery. It took me a while to find her grave. The concrete cross mentioned in my father’s diary had collapsed, but the inscription was still clear enough, Jamila Konjo. The grave, like all the other graves in the cemetery, was covered in grass that reached up to my knees. I stood there a while, but nothing overwhelmed me. It was just a grave with a slight concavity that suggested that the roof of the cheap coffin must have since collapsed. In the distance a half-naked gravedigger waved at me cheerfully from inside a fresh grave. I waved back. I could have borrowed a cutlass to trim the grass… but I didn’t see the point – in three weeks I would be gone for ever and it would just grow back anyway. I looked out over the river. From where I stood, the land dropped rapidly away, at the riverbank a small market was bustling. Laughter, snatches of conversation, filtered up to me.

I tried to say something but I hadn’t known her, really. There was no picture in my head. She had been dead twenty-eight years and all the romantic pictures of motherhood were tainted by my father’s painful dairy. I was really doing this for my father, not for her. A woman with two young children in tow entered the cemetery and I walked away from Jamila’s grave, not wanting to encourage any questions. I pulled out my camera and took a few touristy photographs, then I drifted out of the cemetery. Twenty minutes later, I was at the witchdoctor’s.

Rayo was sniffling when I arrived. I was so taken aback that rather than slip into the backyard, I paused a few paces from her. ‘Are you alright?’

‘If he’s only two years, there’s still plenty of time for you to-‘

‘Can you imagine, I couldn’t even give him a father!’

‘Let’s play,’ I said, pulling up the chess board to distract her.

‘You said you couldn’t play chess,’

In the nick of time, I remembered my earlier lies to avoid her, ‘You can teach me, how hard can it be?’

It was in those circumstances that I sat down to a game of chess without first saying hi to De Sampa, but he refused to see it that way. For the rest of that day be was calling me, Rayo’s-Writer-in-Residence.

She explained the basics of the game to me, calling the knight, ‘the horsething’. She moved her pieces recklessly, as though we were playing draughts, rather than chess, but I had to maintain my lies so I let her beat me in our first two games. On the third game, I tried to up my game a little, but hers seemed to improve as well and she won easily. For the fourth game I dropped the pretence and pulled out all the stops. ‘That’s better,’ she grunted happily, pulling the stool with the chessmen closer to her. We played with full concentration. I suppose it was now clear to her that I was no neophyte, but I didn’t care anymore. I had played proper tournaments in university and her defeats rankled. Within fifteen minutes, I had her in a bind. I tried not to grin.

‘Have you sent your own mother a card?’ she asked in a judgemental voice,

‘I don’t believe in all that commercialised nonsense.’

‘I see.’ She reached out a hand and hovered over her last rook.. It was the obvious – and flawed – move, and I couldn’t stop the grin. Checkmate was two moves away.

‘Have you phoned her?’ she asked.

‘Why? If the card is too expensive for you, how much is three minutes phonecall? Do you want to borrow my phone?’

‘Because! Why are you boys always so childish! A woman asks a mature question and you say because. Because!’

‘Because she’s dead,’ I snapped, unable to keep the anger from my voice, ‘she died in childbirth, okay?’

‘So what’s the big deal, are you the only person whose mother is dead?’

‘My father is dead as well,’ I said, regretting the statement as soon as it was out. There was something about Rayo that made me regress into schoolyard childishness.

I stared at her as she moved her rook into my trap. I tried to remember my obvious move.

‘Your move!’ she said, then she added, ‘My real mother is dead too, did you know that?’

‘What about that… lady…’

‘She’s my stepmother. It’s hard to believe, isn’t it? It’s your move – or can’t you think and talk at the same time? When she first married my father I was very young, and I used to cry and cry until she let me sleep with her in her own bed – she thought it was love, but…’ she laughed wickedly, ‘children! … I didn’t want her sleeping in my father’s bed, that was all! Anyway, we get on very well, now… she’s even closer to me that my own father. Can you believe that? Come, are you surrendering or what? Play your game!’

‘Surrender? Ha!’ I snapped up her rook, realising at the last minute that it would have been safer to pass up the officer and go for the king, but it was too late. Her queen snaked across the board. The game ended in two moves alright, but not as I had anticipated.

‘Sorry about your mother,’ she said sweetly, gathering up the chessmen.

‘Yours too.’ I said tightly, rising. At least she was in a better mood.

As I turned for the door, De Sampa came in, bearing a tray stacked with an indulgent meal for Rayo. ‘Good afternoon.’ he said, significantly.

I glanced at my watch. It was a minute past noon. ‘Good afternoon,’ I replied, pleased he had not caught the exchange about mothers.

‘What happened to your mother?’ he asked.

I panicked, ‘Nothing serious, just a little malaria,’ I looked across at Rayo’s widening eyes and shook my head slightly. Her brows rose, but she returned obligingly to her forgotten novel, and my secret was safe from the witchdoctor.Yet, as I hurried to the toilet my heart was pounding: I was such a fool. It would have been more sensible to take on the witchdoctor than to be indebted to Rayo! I spent the next hour there, thinking how unfair it was to have to pay Alma for a stint in the loo.

The Secret Diary of the Witchdoctor’s Writer-in-Residence (6)