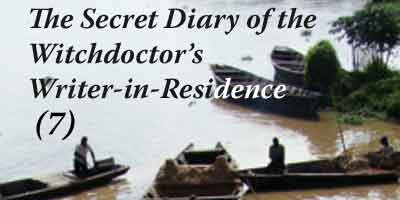 The Secret Diary of the Witchdoctor's Writer-in-Residence (7) 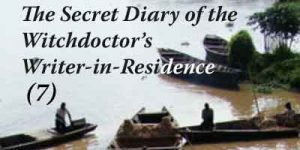 ‘Are you any good at Economics?’

She was swamped by the notebooks and files her father had brought for her. She had registered for the exams the year before and was newly resolved to take it. The single-minded attention she paid her books had made a tremendous difference to De Sampa and I: it was almost noon and the question was the first comment she had addressed to me since her distracted response to my greeting that morning. It froze me in my tracks. I was pleased she said “Economics”.

‘Oya come now,’ she snapped, conscripting me into her revision strategy with ill-grace. An hour passed. At some point, De Sampa came to find out why my toilet break from our draughts game was taking so long. He glared posionously, but – to his credit – retreated without a word.

She listened like a sponge. I spent eleven minutes breaking down Karl Marx’s more heinous sins against the English Language and when I paused for breath she raised a small finger. ‘Yes?’ I asked, feeling a little professorial.

‘There’s something that has been bugging me,’ she said.

I smiled, ‘Why they say “Dialetics” when they mean “Dialogue”?’

‘No. Do you know the worst aspect of this whole business?’

‘My torn panties,’ she said gloomily.

I blinked, speechless. She stroked the Marxian beard on her textbook and mused, ‘that morning all my panties were wet. – I mean, they were soaked in a bucket in the bathroom. I searched and searched and searched and found this torn one that I thought I had thrown away. Can you imagine? The first time I ever wore torn panties in my life, and it was the very day I had an accident!’ She glared, ‘You saw it, didn’t you?’

‘I’m sure that doctor in the hospital saw it. It’s the most embarrassing day of my life!’

Silence. I closed the Engels book.

‘You have nothing to say?’ she asked cantankerously.

I hesitated, and decided she was no longer referring to socio-economic theory. ‘Reminds me of my university days,’ I began gingerly, ‘I used to drive a kabu-kabu for some extra pocket money and I once picked up two passengers at Kofar Gate. They didn’t know that I spoke Hausa and throughout the fifteen-minute journey they were talking about how dirty and smelly me and my car was!’

‘They were?’ she laughed delightedly.

‘They were. I was so embarrassed! Then when I dropped them off, I told them, ‘Nagode, sai an jima.’

Her eyes were round with anticipation, ‘And?’

‘They spoke to me in Hausa and I replied fluently. You should have seen their faces. It was their turn to be embarrassed.’

She laughed heartily, and was mollified enough to return her attentions to Marxism.

In the evening, I was playing draughts in the front yard with De Sampa, killing the crucial hour before 5pm, when an asthmatic Peugeot 504 pulled up in front of the house with a woman at the wheel. ‘That’s my favourite customer,’ he said happily. I was three moves to yet another victory and despite my vice-like grip on the game board he managed to scatter the tokens as he hurried into an unprofessional embrace that suggested that his best customer was also a spinster. I wondered if all that zeal came from seeing the first patient of the day in the nick of time. He introduced her but her car – which she had switched off a few minutes earlier – was still judddering and I failed to catch her name. He led her into his consulting room and I followed.

‘Hope no problem,’ he said solicituously as she settled into the patient’s chair, ‘how’s your husband now?’

She shrugged and sighed heavily.

She glanced at me and swivelled her wedding ring patiently. She sighed again.

‘Is it Coke? Okay, BC, bring her one Coke, you hear?’ He winked at me, ‘The Coke in the bottom, bottom drawer of the fridge, eh? It must be very cold now.’

I rose to do his bidding. As I passed Rayo, she dropped a pen behind her recliner and I had to help her get it. As I straightened up, she inhaled deeply, ‘You don’t smell badly anymore,’ she said, grinning wickedly. I wanted to tell her she wasn’t wearing torn panties anymore either, but I let it pass. On my way into the yard I tried the door to his inner sanctum but it was, of course, locked. I had photocopied the contents of the ’82 file but was beginning to despair of a chance to return it. I found a chair in the backyard and pulled out my photocopy of my mother’s case notes. It was six or seven cryptic lines on a single sheet. At the bottom of the page there was an xxx followed by small brown goat with miser in brackets.

I mused over the page without making head or tail of it. Five minutes had passed and my curiosity got the better of me so I folded away the photocopy. I pulled a Coke from his fridge and returned, and she was well into her flow, neither breaking off nor glancing at me or the Coke, ‘…and despite that he said nothing! Can you imagine? Nothing nothing! De Sampa, I didn’t ask you for mumu o! I wanted to calm him down, not to make him a mumu!‘

‘Don’t tell me to calm down! Even his mother and his poke-nosing sisters are asking what is happening to their son and brother. I don’t want trouble o! I just said you should make him stop beating me, that’s all. Maybe you should change the medicine,’ so saying, she put a large empty bottle on the desk.

He blinked. ‘What’s this? Where’s the medicine? Did it pour away?’

‘Is finished now,’ she said. She took a packet of chewing gum from her large handbag, not resisting a pout at a pocket mirror in the process, and a dab at her reddened lips.

The witchdoctor was cracking his fingers agitatedly as she unwrapped her gum, ‘How can it finish? Is it not last month that I gave it to you? How much have you been putting in his food?’

‘Half-teaspoon,’ she said indignantly, ‘you think I’m a illiterate? Is that not what you write on the bottle?’

‘Then how can it finish like this!’ he said hotly, ‘you think me I’m a fool? A business that I have been doing for the last 30 years? That medicine should last you another four months at least! Have you been selling my medicine to your friends? Remember what happened to Bisi?’

‘It will finish now,’ she protested, chewing gum nervously, ‘do you know how many times he eats every day? Don’t you see his pot belly? Nothing less than six times a day! Even, yesterday, by eleven in the night he was still asking for peppersoup…’ she broke off. The witchdoctor was on his feet, staring at her with his mouth open, ‘…what?’ she demanded, defensively.

‘You put half-teaspoon in every meal? Every meal?’

‘You want to kill him?’ he screamed. I had never heard him so shrill, ‘You want to put me in Police trouble? Why are you women so stupid!’ He stalked to the door slapping his head in a good imitation of Rayo’s father. He stalked back to her. He was panting. ‘Can he still talk?’

‘I said he’s fine! He’s just doing like mumu, that’s all. If I don’t tell him to go to work he will just sit in front of TV from morning to night. And is not only me who is pushing him around, that’s the problem. Is everybody. His boys in his shop are just treating him like suegbe. I didn’t say you should make him a mumu. I just said he should stop beating me, that’s all…’

‘So why are you putting it inside every meal? Are you stupid? I said once a day! ONCE A DAY!’

‘CAN YOU STOP SCREAMING?’ screamed Rayo from her wing, ‘SOME OF US ARE TRYING TO READ!’

‘He stopped beating me after the first week,’ said the woman soberly, ‘but he was still abusing me in public. Me I don’t mind abuse inside the bedroom – if you like you can call me stupid from morning to night, me I really don’t mind, but is the public abusing that I can’t stand. That’s my own. So I said, let me just increase-‘

She rose uncertainly, ‘what about the medicine?’

‘My husband nko? Will he still be like mumu or will he start beating me again?’

‘I say go,’ he shouted, ‘if he likes let him kill you! He was a mumu for marrying you in the first place, go!’

She left in a huff, hinting darkly of a handsome young herbalist she had discovered at 9th Mile. Ten minutes passed before a whiny ignition started up the car and the noisy aspirations of the engine became strong enough to pull the Peugeot away. I sat still as the sound of the marital disaster faded, trying not to draw his attention, but he glared at me all the same, ‘If she drank that Coke, you would have paid for it, I swear. When I wink and say “bottom, bottom drawer”, it means – give her chance to talk! and say that Coke has finished! Are  you a child of yesterday?’

I wanted to tell him that I did not attend Houseboy School, but I figured that he had had a bad day, so I just shook my head. Eventually I asked, ‘What happened to Bisi?’

He looked confused, ‘Who is Bisi?’

‘You told her to remember what happened to Bisi.’

‘Oho. Bisi was her best friend. Very greedy girl. She ate the food containing the love portion I made for her husband.’

‘She left it in the fridge for her husband and the glutton warmed  it and ate it. Everything.’