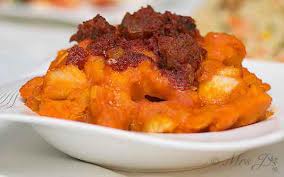 The Seductive Yellowness of Yams

You will laugh when I tell you this, but it was the aroma of yam pottage that took me off my bus at the Waterside motor-park sixteen years ago. My youth service in Bushemina was over and I was on my way home to set up shop as a lawyer in Kano. It wasn’t something I was very keen about, truth be told: I had lived in Kano all my life and didn’t get on too well with my brother, Yusuf. But he promised rent-free accommodation while I found my feet, and it was less risky than setting up shop on my own.

So the night bus driver made this 5-mile detour to Waterside in search of passengers. It was just after 10pm and most of us in the bus were already asleep. The conductor was outside the bus, yammering, trying to fill the remaining four or five seats. A rag-tag army of hawkers besieged our windows, the chant of ‘buy bread, buy butter bread’ the smell of fried snails, barbecued lamb suya… but it was the aroma of yam pottage that opened my eyes, that swivelled my head from side to side until I saw the mama-put with the signboard, Ma’Comfo’s Buka. It was sited at the junction of motor-park lane and Cemetery Road.

Most people understand the elementary facts about yam pottage: white yam has a chiselled aspect that it loses after cooking in palm oil. Palm oil has a redness that it loses in a boiling session with water and yam. It is in the happy, orangey compromise, mediated by a generous body of smoked fish – mangala of course – spoons of powdered crayfish, onions, smoked prawns, periwinkles, scotch bonnet peppers, the glorious ukpaka – just for the crunchy texture, you understand – and oxtail stock in crushed tomatoes, it is from these basic building blocks that the most delectable yam pottage is made – with a quarter or so of the solid contents mashed so that the meal arrives on your plate like molten lava with yellow boulders of yam.

Assemble all these and you may still end up with a merely competent meal of course, because there is also that element of timing and local spicing, of flair, of witchcraft even, that moves a pot of chopped yam from meal to miracle; and that night at Waterside garage, what Ma’Comfo was cooking was a miracle, I’m telling you, because she had substituted white yam with yellow yam of that gooseflesh-provoking consistency. That was the killer, that.

You will ask me how I could tell all this just by the aroma and a tasting, but the nose knows, my dear, the nose and the tongue, they know everything. Sixteen years ago I was squirming in the bus and thinking: look Kasim, why not sleep in that hotel over there and continue this journey tomorrow morning. Night journeys are very dangerous these days, all those stories of armed robbers waylaying buses near Lokoja… all those sleepy bus drivers driving over the sheer cliffs of Milken Hill… So instead of getting four or five extra passengers, the conductor lost one. He was grumbling and cursing but he had no choice but to drop off my box in front of the mama-put – I caused such a scene.

After dinner I checked into the small hotel opposite where I composed the first of many false text messages to Yusuf about a bus breakdown. The idea was to leave in the morning as I said, but you know how these things are. It was essential to find out if Ma’Comfo’s pottage of the night before was a one-off miracle. That kind of thing. Anyway, that first morning in Waterside, as I was strolling, killing time until the buka opened in the afternoon, I made an interesting discovery: there were only two law chambers in the town-village of Waterside. And two is a curiously small number of chambers for a place like this, considering the thousands of lawyers that graduate from the law schools every year. Anyway, before I knew what was happening it was afternoon and I was back in the buka to see if what happened the night before was a fluke.

Friend, it was not.

Folks have been spreading stories about how a Kano state indigene with no local ties back then came to set up the third law office in small Waterside. They can say what they like, but here’s the truth: it boiled down to a pot of yam pottage.

8 Replies to “The Seductive Yellowness of Yams”