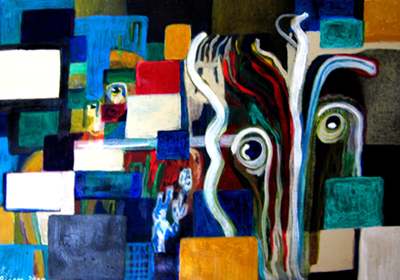 The Tranquil Life of Sukosu and Wife 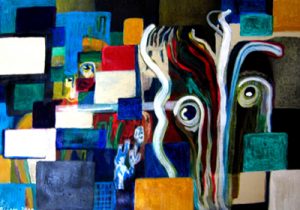 Sukosu watched his civil servant wife in the shy light of the moon. They had been married twenty-five years but Wambi still undressed in the dark. She slipped on a nightdress and climbed in, burrowing deep into the bedclothes until he felt her warmth beside him. As her bedside lamp winked on, she pulled up the police procedural she had been reading for the past four nights. Their eyes met and smiled. It was 9 pm. Between them would stretch a long hour of luxuriant silence punctuated by turning pages – they were retiring folk, and none of them had grown the garrulousness that a boring wedlock sometimes induced.

She paused, novel flat against her bosom, ‘I love you,’ she said.

He met her eyes. ‘Me too,’ he replied, softly. And it was true, too, he thought. Indeed, thinking on it, he had never felt more tenderly towards her than he did at that moment. He took her hand and lowered his own novel. The question he had bounced all day on the wall of his mind now slipped his defences: ‘Was I your first true love?’

She searched his eyes anxiously, and sensing his mood, relaxed. She laughed nervously and fell silent for so long that he thought she would not answer, but she did. Shyly, ‘No.’

He knew the stir of an excitement he had not felt for a decade at least. He saw how it was possible to know someone for a quarter of a century, and not really know the person. Their lives were so… safe: a nice, quiet life defined by the doing of exactly the same things over and over again. The only questions they ever asked themselves were the safe ones: do you want egusi or okra? Do I look good in this? Do you love me…? Without discussing it, they had know that they would not make love that night. Not until Saturday evening. It was not a bad life, but he suddenly loved her so much that he wanted more. He wanted to know everything. Her first love would have flared and died some thirty years ago. He felt strong enough to know everything about this other man, who would have been a kid really when they had their affair. His wife was newly mysterious, doubly exciting, and he was anxious to flesh out these stirring dimensions of her. A new vista of cloning questions began to grow in him. Who was her favorite sibling, her most valued parent? Would she marry again if he went first, after how long? ‘Tell me all about him,’ he began bravely.

When she said ‘It was a her not a him,‘ something strange moved in him that was difficult to describe; feeling eerily like that discomfort he experienced after his hernia operation when – for weeks and weeks – he felt as though his bladder had been reversed, as though in pushing back his plumbings they had turned the damned organ wrong side up. Without knowing how a bladder should properly lie, he felt that odd discomfiture that was not pain, but which so disturbed him that he once considered jumping off a balcony so that the shock of landing might knock his organs back into their usual orientation.

Now he wished he could take a running leap and leave this sinking submarine, land on the harbour of his old ignorance, but she was still talking. Her initial nervousness was gone. Her novel lay forgotten and her fingers were speaking as well, as they only ever did at her most excited, with an animation he had not seen in years. It was as though in airing a 30-year old secret she was emerging from a dank dungeon, reliving a long-buried innocence, ‘I was a naughty nineteen, she was just…’

He leaned over then and kissed her quick lips, stilling the wet muscles quivering with voluptuous secrets, kissed them until their gossipy tautness slackened. He kissed her with his eyes wide open too, watching her own, startled, puzzled eyes – until their fire dulled and things were almost safe again. Then he broke that kiss apart, tentatively, broke away, but she made no effort to continue.

He fell back slowly onto his mound of pillows. He had made harbour, but the sinking feeling persisted. (His rash question had been provoked by jealousy. Yesterday he had seen a Blackberry question from Adel87988, an online contact she had never even met: what about you, who was your first love? At the time he had chafed that a stranger would know things about his wife that he did not know. Now, he did not particularly care.) How many weeks would it last this time, he wondered, before this discomfiture passed? He took up his novel as well. They were both back in the safe world of crime fiction. Sukosu swallowed, straining for the tenderness he had felt a moment before, ‘I do love you.’

‘Me too,’ said Wambi from deep inside in her novel.

Their long silence stretched on.

16 Replies to “The Tranquil Life of Sukosu and Wife”