Upon finally learning 'How to Euthanise a Cactus' 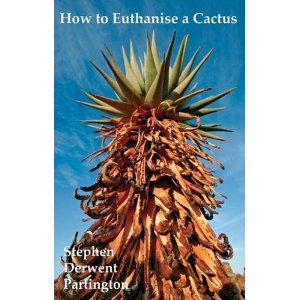 I had been wondering how to do the deed, ever since I first stumbled upon the title of Stephen Derwent Partington’s second poetry collection. Clever writers (and editors) will leave the answer until page 77 of an 80-page book to make sure you read it all, but cleverer readers like me will flip through (oh for an analogue google that sits behind the eyes!) until I find the cactus poem, Rains and Leaders.

Two failed rains can euthanise a cactus,
wring an aloe like a flannel to its
final drop.

I won’t check this statement for scientific accuracy with my many botanist friends (and if you are reading this, please don’t tell me) – it all makes poetic sense, and that’s enough. And the little ploy to keep the reader reading on to the end was quite wasted on me. From Lethe, the second poem of the collection, I was sold, and had to put aside the book to theorise that some of the most essential attributes of a poet are that sense of rhythm that pendulums in the brain as your eyes swing to and fro across the shortened lines… that, and wit.

From the sad and angry poems to the neat and funny ones. The sense of wit that with a final line converts the poetic exercise into a knowing wink between instigator-poet and conspiring-reader. This is what the line of a good poem does when you apprehend it with your eyes: it does not remain still. It weaves, jinks like a sinuous snake in your hands. You cannot predict where it goes, but it is muscular, it carries you along and you know that pretty as it is, with its colouration and slippery similes and all, it may well have a sting in the end. No poem stung quite as lethally as In the Name of Any Faith’s God (Bomb in a Crowded Market). Get over the long title and a stately poem ensues… until the bi-syllabic cobra-strike of the very last word of the poem completely changes the nature of the stately beast. No, this blog is not the sort of place to share that sort of word. But it’s not that sort of book, honest.

There are many places to go for word music, but how about the inelegantly named, If This, Then That

All the Mountains of the Moon stand tall,
but how can this convince us
that a mighty Nile is flowing

A gentle, angry endless rebuke is unleashed in Customary, and makes Partington a dangerous guest to invite to your next party. This keen observer sits back at a traditional wedding and conflates bride with brideprice, leaves traditional roles squirming at the end of a sad, poetic stare, and ends with a final poignant line,

Two father figures hold the struggling brideprice around her throat
From ear to ear they carve a lipstick mouth, a cut
that severs everything: the jugular, the windpipe, bone,
and youth from married life…

In the garden, look: a stray dog gnaws the pelvis.
Look:  she sees it.
Look: her wedded stare is endless.

It is not possible to extract a quote from Praise Poem, a poem that has to be savoured in its entirety. I will try anyhow,

We praise the man who,
though he held the match between
his finger and his thumb,
beheld the terror of its tiny drop of phosphorus…

no, I give up.  I also give up on the collection. For now. These poems are to be savoured, not wolfed.

3 Replies to “Upon finally learning 'How to Euthanise a Cactus'”